The initial symptoms of an Omicron infection are the same as former Covid-19 infections from other variants like Delta. 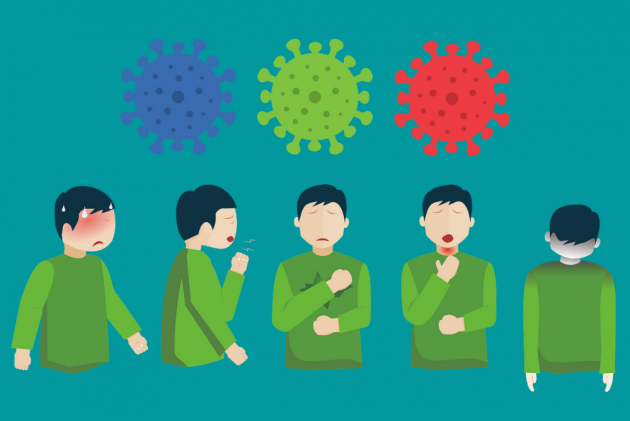 Since being named as a 'variant of concern' by the World Health Organisation, the Omicron variant of Covid-19 has spread rapidly across the world. While the effect of Omicron, which was first reported by scientists in South Africa, have been deemed to be "mild", the lack of strong symptoms has led to a lot of confusion among people, especially in India where the onset of the Omicron wave has coincided with flu season.

According to the Centre for Disease Control, the SARS-CoV-2 virus has the following symptoms: cough, fever, fatigue, chills, shortness of breath, body ache, soreness of muscles, throat ache, runny nose or congestion, nausea, diarrhoea, and one of the most telling markers, loss of smell and taste.

However, different variants of Covid-19 have shown differing sets of symptoms. This is due to the difference in the way each variant (which contains different spike proteins) impacts the human body.

Covid-19 Home Isolation: What Are The Guidelines For Patients And Caregivers?

What are the symptoms of Omicron?

According to a study conducted in the UK, symptoms of an Omicron infection are not that different from a Delta infection. The ZOE Health Study, conducted by a science firm named ZOE in collaboration with King's College, studied 4,000,000 participants. Both Omicron and Delta cause symptoms like fever and chills, runny nose, sore throat and body ache. However, the study found that symptoms like loss of smell or taste might not occur in all persons with Omicron infection. A study conducted by researchers in Norway studied the outbreak of Omicron among dozens of people at a Christmas party and found that only 12 per cent people lost their sense of smell while only 24 per cent of people lost their sense of taste.

However, anecdotal and self-reported data from patients suggest that patients may face one or more Covid-19 symptoms. While some have reported prolonged headaches, others have reported sore throat and body ache.

Does Omicron impact the body less adversely than Delta?

While there is no evidence to suggest that Omicron affects the body differently than Delta, doctors and scientists note that getting infected with Omicron may not lead to severe disease or hospitalisation. According to emerging evidence, Omicron seems to impact mainly the upper part of the respiratory tract that in turn causes milder impact. According to the WHO, Omicron is also having a "decoupling" effect on some places where cases have been soaring but death rates have been low. Doctors have also found Omicron to have less of an impact on the lungs as previous variants like Delta which have greatly damaged lung function and even caused pneumonia.

Not necessarily. In an interview with CNN, Dr Shira Doron, an epidemiologist from Tufts Medical Centre in Boston said that though Omicron may cause milder symptoms, it can lead to prolonged weakness and health impact in what is known as 'long Covid'. The latter is a condition in which symptoms of Covid-19 linger on for months and may affect internal organs.

How to self-detect Omicron infection

The initial symptoms of an Omicron infection are the same as former Covid-19 infections. These include soreness of throat, runny nose and fever. Patients have also reported heaviness and headaches. In case symptoms occur after coming in contact with a Covid-19 patient or potentially exposed to the virus, authorities have advised individuals to get tested immediately. Several 'Lateral Flow Tests' and home test kits are available in the market right now for self-administering home tests. However, many of these do not yet have recommendations from experts. As of now, an RT-PCR test remains the most reliable form of Covid-19 testing as it detects even low viral loads.

Since the rise in Omicron cases comes amid the annual flu season in India, the influenza virus is also around and infecting some. Initial symptoms of Omicron can be similar to the flu or common cold (all three are different). Experts, however, agree that it is nearly impossible to distinguish the preliminary symptoms of common cold, flu and Omicron.

According to an advisory by the Health Ministry, anybody experiencing cold symptoms that are similar to Covid-19 should self-isolate and monitor their own health. In case symptoms persist or get worse, they have been advised to get tested. However, since a majority of people are not ending up in hospitals, home isolation guidelines are important to follow to prevent the further spread of the virus.