On First Visit To Bihar After Coup Against Him, LJP Leader Chirag Paswan Receives Rousing Welcome

Chirag Paswan is in Bihar to take part in an ‘aashirvaad yatra’ to mark the birth anniversary of his late father and party founder Ram Vilas Paswan. 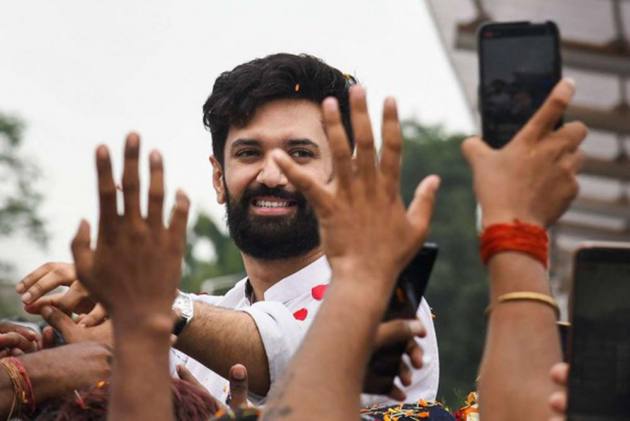 Lok Janshakti Party (LJP) leader Chirag Paswan received a rousing welcome in Patna on Monday. This was his first visit to Bihar ever since his uncle Pashupati Kumar Paras staged a rebellion against him with most of the LJP MPs supporting Paras in an attempt to oust Paswan from the party.

While Paswan may have been removed from the post of party chief, the recent infighting in the LJP seems to have had not much impact on Paswan’s popularity.

As soon as he arrived in Patna earlier today, his supporters thronged the airport after camping outside it for hours in anticipation of Paswan’s arrival. His supporters erupted in applause as he walked out of the airport, raising slogans and flinging garlands as he embarked on his journey, riding a bedecked open jeep.

Paswan is in Bihar to take part in an “aashirvaad yatra” to mark the birth anniversary of his late father and party founder Ram Vilas Paswan.

Meanwhile, Paras, who is currently the MP from his deceased brother's pocket borough Hajipur, presided over a function held at the LJP state headquarters in Patna to mark late Paswan's birth anniversary and iterated that his nephew has gone astray, forcing him to part ways, and demanded a Bharat Ratna for the party's founding president.

However, streets leading to the Patna High Court, which look deserted on account of most judicial work taking place online, got jam-packed as Paswan junior arrived, donning a blue turban, to garland a statue of B R Ambedkar.

After a brief stopover at his house in the city, Chirag is scheduled to travel to Hajipur and launch 'ashirwad yatra' -- aimed at seeking the blessings of people and, thereby, laying his claim to the legacy of his father, who was the tallest Dalit leader of his generation to have emerged from Bihar.

Before leaving his New Delhi home earlier in the day, Chirag came out with a number of tweets remembering his father who died in October last year and remarked "haar nahin manoonga" (I will not give up).

Paras, who has succeeded in displacing his nephew as the leader of the parliamentary party and also got unanimously elected the national president of the breakaway faction, looked unfazed.

"Our stand is clear -- we are with the NDA, which comprises the BJP and Chief Minister Nitish Kumar's JD(U). It is Chirag who needs clarity as to what political course he wishes to follow," said Paras who has been blaming his nephew's untenable stance of supporting the coalition but opposing its chief ministerial candidate during the assembly polls for the split.

The JD(U), which has been accused of engineering the split, has been understandably silent over the development.

However, Chirag has expressed his anguish over the BJP's "silence" despite his unflinching loyalty towards Prime Minister Narendra Modi.

The BJP OBC Morcha's national general secretary Nikhil Anand, who is also a spokesman of its state unit, came out with a tweet in his individual and personal capacity that betrayed the sense of unease in the saffron party over completely disowning Chirag, whose brinkmanship helped it gain the upper hand vis-a-vis the JD(U).

"Usually every son is a mere shadow of his great father. Individual wish on the jayanti of Ram Vilas Paswan ji that you succeed in your endeavours to take up his legacy......my personal sympathies are with you, Anand tweeted, tagging Chirag.

The late Paswan, meanwhile, remains a popular figure in Bihar even after his death, as is evident from the rich tributes paid to him by RJD supremo Lalu Prasad who virtually inaugurated his party's silver jubilee function and addressed workers from Delhi.