'Rahul Gandhi Started Trend Of Resignation In Congress; We Have Nothing To Do With Karnataka Crisis': Rajnath Singh

He has himself asked people from his party to resign, and you must have seen that one stalwart after another has quit, a process which has continued for a while now, Rajnath Singh said in the Lok Sabha. 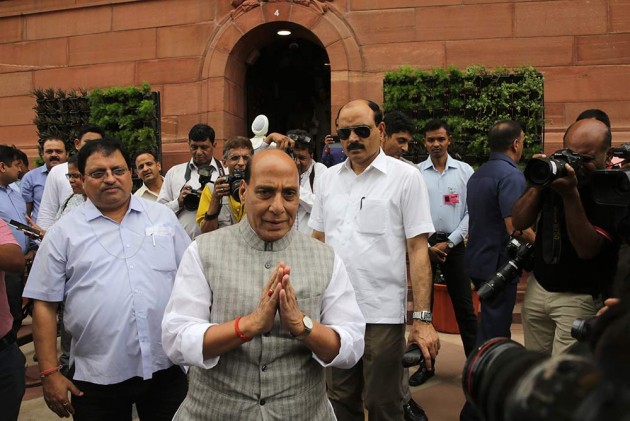 Defence minister Rajnath Singh on Monday took a swipe at outgoing Congress President Rahul Gandhi, saying the latter had started the "trend" of resignation in the grand old party, adding the Bharatiya Janata Party (BJP) had nothing to do with the current political turmoil in Karnataka.

"He has himself asked people from his party to resign, and you must have seen that one stalwart after another has quit, a process which has continued for a while now," he said in the Lok Sabha.

He added that he failed to understand why BJP was being dragged into this controversy.

"We're committed to maintaining the dignity of parliamentary democracy," the home minister said.

The Congress-JD(S) government plunged into a crisis on Saturday when at least 13 legislators from the ruling coalition submitted their resignations to the Speaker's office and met the governor.

On Monday, former chief minister of Karnataka Siddaramaiah said that all 21 Congress ministers have resigned voluntarily and have asked the party to take a decision on the cabinet reshuffle.

Chief Minister HD Kumaraswamy had to cut short his US visit and return to Bengaluru on Sunday as the state government appeared to be falling short of the majority.

The strength of the ruling coalition in Karnataka has come down to 105, which is eight short of the half-way mark of 113.