On Martyrs' Day, Roads Leading To Graveyard Sealed In Kashmir

PDP president Mehbooba Mufti took to Twitter to express her outrage over the locking down of the graveyard as political parties observed the day at their offices. 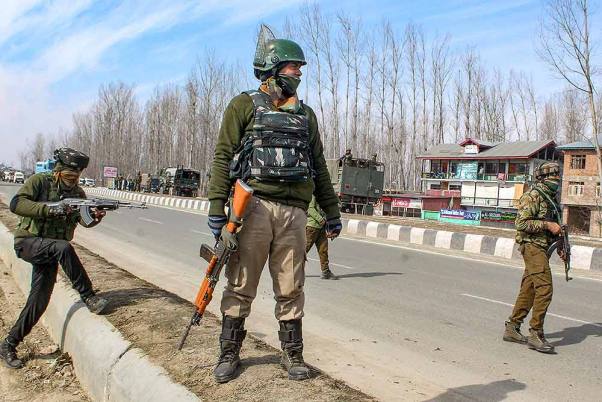 As the authorities in Kashmir sealed off the martyrs' graveyard in the old city area to prevent people and political parties from assembling to commemorate the killing of 22 people by Dogra forces on this day in 1931, political parties observed the day at their offices.

“You cannot rewrite the calendars in our memory. You cannot 'delete' our hopes, nor can you ever erase the chain of solidarity & the will to stand up for what is just, that goes back to nearly 100 years. On #MartyrsDay here is telling you what transpired,” tweeted National Conference spokesperson Ifra Jan.

The Peoples’ Democratic Party also said that the party had sought permission from the Srinagar district administration, but there was no response from the authorities. PDP president Mehbooba Mufti took to Twitter to express her outrage over the locking down of the graveyard.

"Today on the occasion of Martyrs’ Day, gates leading to their graveyards have been locked up. Attempts to distort & rewrite Kashmir's history is being done only to create a sense of defeat & helplessness amongst Kashmiris," she said.

The CPI (M) leader Mohammad Yousuf Tarigami said Naya Kashmir was drafted with the blood of July 13 martyrs, but the BJP dismantled it on August 5, 2019, by abrogating Article 370.

“It was the supreme sacrifices of July 13 martyrs that ultimately led to Naya Kashmir which is notable for its humanistic view of development. By virtue of it, J&K made significant strides including landmark agrarian reforms, free education to all, political and economic rights to women,” Tarigami said.

“The constituent assembly of Jammu and Kashmir was also the outcome of the ‘Naya Kashmir’ and J&K’s special status under Article 370 was the outcome of the struggle of the 1931 martyrs. But, unfortunately, on August 5, 2019, the BJP government unilaterally dismantled whatever little was left,” Tarigami said.

Till last year, July 13 was a public holiday in the erstwhile state of Jammu and Kashmir and a grand official function was held every year on this day. The holiday was cancelled, and all official ceremonies stopped in 2020 after the abrogation of Article 370 and dismembering of Jammu and Kashmir State into two union territories.

On this day, in 1931, Kashmiris were agitating against the Maharaja for arresting a fiery orator, Abdul Qadir, outside the city's central jail. Qadir was arrested for insisting that the only course for Muslims was to fight “Maharaja’s oppression” with sticks and stones if guns were not available. The Maharaja’s forces opened fire on the protesters, killing 22, wounding scores of others. Thus, the first street agitation against Maharaja began in Kashmir. Later, Sheikh Mohammad Abdullah described the day as having the same impact on “our movement as the massacre Jallianwala Bagh had on India’s independence movement.”

Meanwhile, most of the shops and business establishments remained closed today and traffic was thin on the roads.  Jammu & Kashmir Police issued a statement saying it has filed an FIR against unknown people for allegedly circulating a tweet calling for a strike on July 13 in commemoration of Martyr’s Day.  Police said the tweet was being circulated in the name of senior separatist Syed Ali Geelani, 91.

“As per family sources of SAS Geelani, the tweet is fake and issued by someone from Pakistan. Police are acting against those who are circulating it to instigate violence.