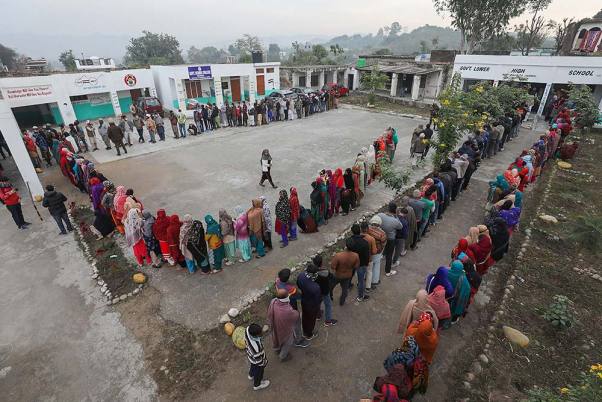 Villagers stand in a queue to cast their votes for the fourth phase of District Development Council (DDC) elections, at Bain Bajalta on the outskirts in Jammu.
PTI photo
Naseer Ganai 2020-12-07T17:58:03+05:30 On Polling Day, Govt Snaps Even 2G Internet Services In South Kashmir

The government today shut down 2G internet services in South Kashmir during the fourth phase of polling of the District Development Council elections.

Anantnag deputy commissioner K.K. Sidha told Outlook that the government had valid reasons to shut down the Net. However, he refused to divulge the “valid reasons.”

The Jammu and Kashmir administration has ordered continuance of 2G mobile data services citing apprehension about misuse of high-speed Internet. The government has cited the district development council polls as an example saying that there are apprehensions of misuse of high speed Internet to disrupt the district development council and panchayat polls.

However, in the south Kashmir districts even this service was snapped early Monday morning creating problems for students and people. “I got a lot of calls in the morning from different people as the sudden snapping of 2G services created panic leading to lot speculations,” said a local journalist.

“We have already have 2G slow speed Internet and irony is they don’t even allow this facility to run normal course as well,” said Congress J&K president Ghulam Ahmad Mir. Mir said even if at all internet was snapped for the elections, political parties should have been at least informed about the reasons. “Steps like snapping the Internet is taking away basic rights from people. The government should have facilitated the election process by continuing Internet services instead of snaps such services,” he added. “I fail to understand why they do it,” he said.

Early this year, the Jammu and Kashmir government invoked “very peculiar geo-political position of Jammu & Kashmir and its geographical proximity with Pakistan” in the Supreme Court as one of the arguments not to restore high speed internet in Jammu and Kashmir. The government also quoted professor of law and public policy, Pepperdine University, Gregory S. McNeal that “terrorist organisations have also begun to employ websites as a form of information warfare” in its defence. It had also said the right to access the internet is not a fundamental right.

Roads To Take For Entering, Exiting Delhi-Haryana Ahead Of Farmers' Bharat Bandh Call