Congress says BJP celebrated 'without studying the verdict' of the Supreme Court. 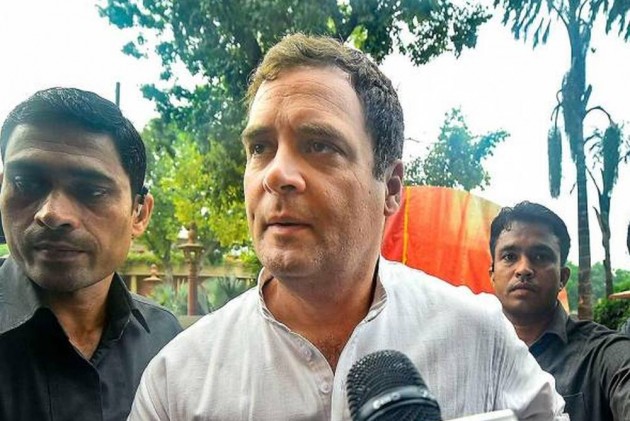 Congress leader Rahul Gandhi on Thursday said the Supreme Court's Justice K M Joseph has left open a "huge door" for an investigation into the Rafale deal and demanded that a probe must begin in full earnest.

He also called for a Joint Parliamentary Committee (JPC) probe into the fighter jet contract.

Gandhi's remarks came after the Supreme Court gave clean chit to the Modi government on the purchase of 36 fully-loaded Rafale fighter jets from French company Dassault Aviation, rejecting the plea for registration of an FIR by the CBI for alleged commission of cognisable offence in the deal.

The Congress, too, on Thursday said the BJP has been celebrating the Rafale verdict without studying the judgement properly and added that through its verdict the Supreme Court had "opened the gates for investigation" of the fighter jet deal by agencies.

"The BJP has a habit of celebrating without studying the judgements. The Supreme Court in the Rafale case today opened the gates for investigation by agencies, as it accepted that the issues of feasibility, technical specifications and price of the jets do not come under its purview under Article 32," said Congress spokesperson Randeep Singh Surjewala.

The Congress alleged that the BJP was "misleading the nation" on the Rafale judgement and said that they should allow the CBI to investigate the Rafale deal case "without any political pressure".

After the verdict, BJP leader and Union Minister Amit Shah said, "the SC order giving clean chit to government proves that disruption of Parliament on Rafale issue was a sham."

"We find the review petitions are without any merit," said a bench comprising Chief Justice Ranjan Gogoi and Justices S K Kaul and K M Joseph.

Reading out the judgement, Justice Kaul said the judges had reached the conclusion that it is not appropriate to order a roving inquiry into the allegations.

Justice Joseph, who wrote a separate judgement, said he agreed with the main verdict written by Justice Kaul subject to certain aspects on which he has given his own reasons.

"Justice Joseph of the Supreme Court has opened a huge door into investigation of the Rafale scam. An investigation must now begin in full earnest. A Joint Parliamentary Committee (JPC) must also be set up to probe this scam," Gandhi tweeted with the hashtag 'BJP Lies On Rafale'.