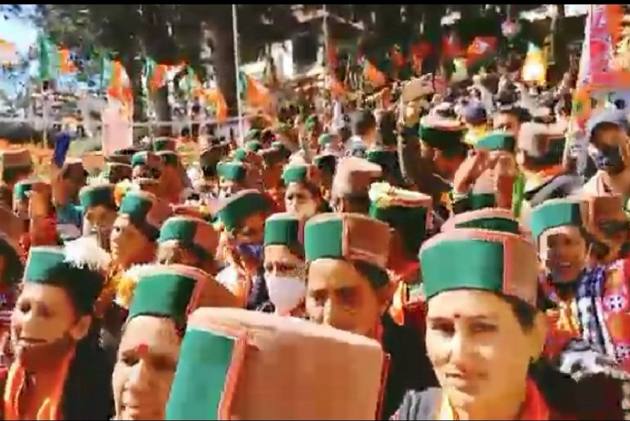 Finding itself on the back foot after roping in Kanhaiya Kumar as the party’s star campaigner for bypolls in Himachal Pradesh, the Congress may skip its plan to host Punjab PCC president Navjot Singh Sidhu and other campaigners for the impending bypolls in the state.

Barring former Union minister Anand Sharma, who hails from Shimla and happens to be Rajya Sabha member from Himachal Pradesh, the party has taken a decision to bank on its home-grown star campaigners--Mukesh Agnihotri, who is also leader of Opposition, Asha Kumari, a six-time Dalhousie legislator, other MLAs and former ministers.

The byelections to the Mandi parliamentary constituency, where former CM Virbhadra Singh’s wife Pratibha Singh of the Congress is contesting against Kargil War veteran Brigadier Khushal Thakur of the BJP, is slated for October 30.

On the same day, three assembly seats--Jubbal-Kotkhai , Fatehpur and Arki in the districts of Shimla, Kangra and Solan respectively--will also elect new legislators in bypolls.

The bypolls are being seen as a ‘semi-final’ ahead of next year’s assembly elections, and are crucial for Chief Minister Jai Ram Thakur of the BJP. The CM has sharpened his attack against the Congress--a party he claims faces a complete wipe-out.

“After party stalwart Virbhadra Singh’s demise, there is a grim battle going on within the Congress ranks. They are unable to decide on their real agenda for the state or who their leader will be. Thus, they chose people like Kanhaiya Kumar to seek votes for them. You all know who Kanhaiya Kumar is and what he was doing at JNU,” Thakur told a poll rally at Reckong Peo in Kinnaur.

Kinnaur is part of the Mandi parliamentary constituency and Thakur’s home district. That’s why he has chosen to camp at Mandi to ensure the party’s victory. The Congress is banking on a sympathy vote, reminding voters how Virbhadra Singh made a huge impact on the lives of the people through his balanced approach to development, improving the lives of the poor.

Thakur, however, said the BJP is on a strong footing and will win all four seats as no one was listening to what the Congress had to say.

“Our party has not brought any outsider to campaign as star campaigners. They are our ministers, MLAs and myself. The Congress, which can’t stand on its own feet, trusted people who were booked for anti-national activities,” he claimed.

The BJP, towards the end of campaigning--which will end on October 27 (after being cut down by a day by the EC)--has sharpened its attack on the Congress. For the purpose, it has brought in party seniors Shanta Kumar and Prem Kumar Dhumal, both former chief ministers of Himachal Pradesh, for campaigning. Union Minister for Information and Broadcasting Anurag Thakur is also touring extensively and will wind up his campaigning at Jubbal-Kotkhai.

It is the seat where the BJP denied a ticket to Chetan Bragta, son of former minister Narinder Bragta, on the pretext that it doesn’t encourage dynastic politics. Bragta rebelled and, having decided to contest the polls as an independent candidate, is posing tough competition to the BJP’s Neelam Saraik. Congress candidate Rohit Thakur, grandson of former Congress CM Thakur Ram Lal, has also made considerable gains. Thus, the party has chosen to send Anurag Thakur to the constituency to bolster the BJP’s chances.