Once Known For Free Thinking, Bengal Under Didi Has Little Space For Humour

Whether her kneejerk reactions to the mildest of criticism arise out the insecurities of a woman politician out to claim her space in a world full of uncertainties and dominated by male politicians, or a deliberate attempt at nipping the slightest of dissent in the bud, is something the chief minister needs to ask herself 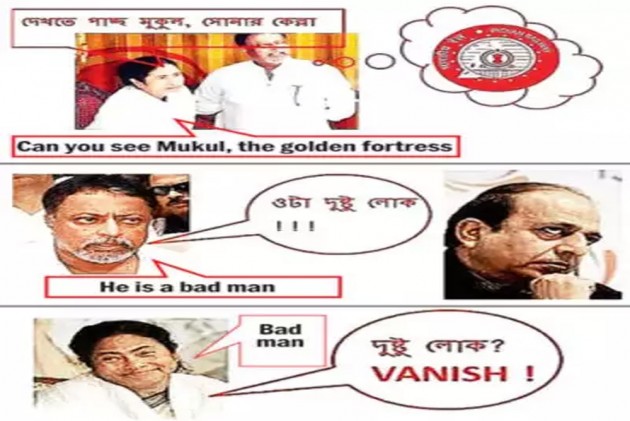 In Mamata Banerjee’s Bengal, you just don’t make fun of her or pun about her. For, making outright fun of or even doing something that ends up riling her, can land you in jail. Never mind the Trinamool Congress supremo positions herself as a champion of free speech.

The latest person to earn the maverick leader’s ire is BJP youth wing leader Priyanka Sharma who found out late on Friday evening that “hurting” Banerjee’s sensibilities could send you behind bars in no time. Sharma had posted a meme of the chief minister on her Facebook page. She was arrested after the image, which shows the Bengal chief minister’s face superimposed over Priyanka Chopra’s recent Met Gala ensemble, went viral on social media platforms.

For the record, Priyanka’s photo from that event has been much in circulation this election season—as it has been used a template to mock at politicians of every hue and stature, including a Narendra Modi in a silver sequined dress and Afro.

Mere mortals would have laughed the picture away, but not Mamata Banerjee, whose tolerance level is not proportionate to any joke at her expense. The bottom line is, you never know which act may end up rubbing the firebrand Didi the wrong way. It may be a caricature, a cartoon, a blog, a film or even an apparently innocuous slogan. And, of course, try shouting ‘Jai Shri Ram’ in her presence.

Take the example of Ambikesh Mahapatra, a chemistry professor at Jadavpur University, who was probably the first prominent victim of the new chief minister’s wrath. Mahapatra was arrested in April 2012 for circulating an email that carried a cartoon supposedly poking fun at the chief minister.

Mahapatra had allegedly uploaded a caricature on social networking sites that showed Banerjee and her then lieutenant Mukul Roy (now with the BJP) discussing how to get rid of party MP and former railway minister Dinesh Trivedi, who since has come back to the party boss’s good books.

The strip was inspired by Oscar-winning filmmaker Satyajit Ray's iconic Bengali movie Sonar Kella (the golden fortress). Mukul is, incidentally, the name of the child protagonist in Ray's film. The cartoon was not to Banerjee’s liking.

In March this year, author Tina Biswas, who had written a novel critical of the Trinamool supremo, alleged she faced harassment during her book launch in Kolkata.

In 2018, a man from Tripura was arrested for allegedly making demeaning remarks against the Bengal chief minister on social media.

That’s Didi, although the libertarian’s darling whose heart still bleeds for the poor! The chief minister who once suggested the high-profile ‘Park Street rape case’ was part of a conspiracy to malign her.

Very recently, director Anik Dutta’s film ‘Bhobishyoter Bhoot’, a political satire that apparently riled the Banerjee government, was pulled down from the movie theatres in Kolkata a day after its release on February 16.

The movie revolved around a group of dejected ghosts who take shelter in a refugee camp. It commented on various sides of governance, or the lack of it.

Cartoonists, writers, filmmakers, stand-up comics and other creative people facing the displeasure of the power-that-be is not something confined to the West Bengal.

In neighbouring Odisha, cartoonist-columnist Abhijit Iyer-Mitra was arrested last year for making unfavourable comments on the Sun Temple in Konark as also about the state MLAs.

The Odisha government faced flak from civil society and human rights organisations, but it did not deter it from making Iyer-Mitra spend 43 days in prison.

Cartoonist Aseem Trivedi was booked for sedition in 2012 for a series of not-so-subtle cartoons against the country’s high and mighty. Every now and then, a filmmaker has to apologise and/or make changes to his script, costing them crores of rupees, for “hurting sentiments” of one community or the other.

The space for creative freedom is shrinking in India, many contend.

In Bengal, exhibiting little tolerance even for completely innocuous comments/depiction, Banerjee is actually doing what she publicly proclaims to oppose.

Is her kneejerk reactions to the mildest of criticism arise out the insecurities, deftly hidden beneath a stony countenance, of a woman politician out to claim her space in a world full of uncertainties and dominated by men? Or has Mamata, the fiery Youth Congress activist who always stood by the commoners, changed?