Bois Locker Room: Monster Made By A Society That Perpetuates Rape Culture

In the Indian society, where consensual sexual relations between men and women are a taboo, only casual sexism is allowed in the open and marital rape is justified by legislators and public alike. 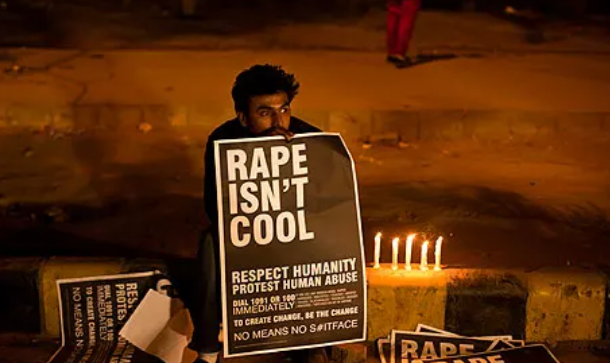 The Bois Locker Room case has opened up the possibility to kick-start the long due dialogue on the rape culture in the country and the possibility of eliminating it within the framework of educational institutes.

Much of the Indian society woke up to an absolute shock by the revelation of text messages from an Instagram private chat group  'Bois locker room' where teenage school-going boys shared nude photos of minor girls, objectified them in the filthiest possible ways and casually "planned" raping them. The society gasped for breath as it looked at the monster of its own making. The Bois Locker Room isn’t a rare aberration but the very product of a society that blames victims of sexual violence, cracks rape jokes, condones exploitation of women, romanticises male sexual aggression and normalises objectification of women’s bodies.

Social media catalyses the existing rape culture and opens up new modes of exploitation of women. The same medium, used by many women to assert themselves and the right over their bodies through posting their images, has also come in handy for those who want to misuse all those photos by morphing or circulating them with intentions to objectify and/or degrade the women to a mere sexual object.

The same exploitation happens in the practice of sending nudes with men breaching privacy and violating the consent of the image sender by sharing it with other people. And once such a man is held accountable, he dumps the blame on the victim for having sent the photos in the first place. They effectively minimise the gravity of rape threats, violation of consent and put the burden back on the women.

But what is rape culture?

Sexual violence is widespread and there is a culture that makes it possible and helps it thrive. Several social and cultural practices that we come across every day create a 'rape culture'—such as rhetoric that minimises and even excuses rape; teaching men to be dominant and sexually aggressive; policing women’s bodies and movement in the name of safety.

It will be wrong to assume that these practices are solely created and carried forward by only men. It is done by a majority in the society, women included. There are women who resort to moral policing, become enablers protecting rapists and abusers and defending their actions. The Bois Locker Room also had its group of female enablers who tried to rescue their “own” and in turn, slut-shamed the victims on yet another chat group.

Sexual violence also has a power dynamic. Social and economic forces instil a certain sense of power in an individual and create possibilities of certain actions. In this case, these schoolboys are mostly upper class, upper caste, cisgender, heterosexual men—the crème de la crème in the privilege category. Their position of gender, class and caste privilege ensures that they feel invincible while committing such heinous acts. When the chat group was exposed, not only further similar Instagram handles were created to continue the unfinished work, but some boys even came up with threats of leaking nude photos of the minor girls. Even after all of this, they garnered some defenders against a large number of critics. Few tweets read: “These are only young boys” or “What about women who share their provocative photos”.

In the existing structure of the society, the image of women being subordinate to men makes the latter feel he has a power over her and, hence, she should be accessible to him in order to fulfil his desires. The concept of a woman’s consent is alien in this setting. However, in reality, the violence occurs because all the bodies of women are not accessible to the men in the realms of civil society and law. Moreover, in the case of Indian society, where consensual sexual relations between men and women are a taboo, only casual sexism is allowed in the open and marital rape is justified by legislators and public alike. This only discourages any healthy discussion or practice of sexual relations among people.

Now, what does the man do with his immense sense of power over the woman? He uses it somewhere where he won’t face any consequences for his actions. That is where Bois Locker Room and other offline locker rooms of men come into play where women are not seen as human individuals, but objects comprising only face, breasts and vagina.

This is how we made the monster, more or less.

What the Bois Locker Room revelation reaffirms is that rapists and potential rapists are everywhere—from the mansions to the slums, from the parliament to your bedroom. It’s just that not every case is reported, not every chat group exposed, not every act screenshot and not every victim saved

Nonetheless, this incident has finally rung the alarm bells loud enough. The next steps should be eliminating everyday rape culture wherever possible and start the conversation early with young people—at both family and institutional levels. There is a dire need to form policies to introduce sex education in schools along with lessons on consent and gender sensitisation for both pupils and teachers. Concerned authorities should wake up to the fact that it is a structural problem that has to be systematically dealt with and mere incarceration of guilty won’t stop rape, abuse and murder of women. Time is up for rapists and their enablers!