RTI remains the only credible means left in our polity today to access the facts within government functioning, and therefore, come closer to the truth, write Aruna Roy and Rakshita Swamy. 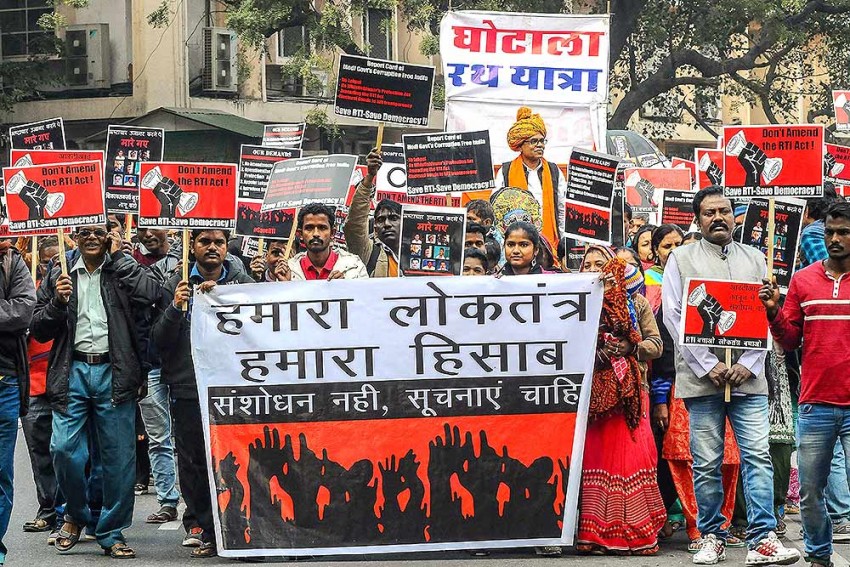 Demonstrators hold banners and placards during a protest against the proposed amendments in the RTI act near the Parliament, in New Delhi. (PTI)
Aruna Roy, Rakshita Swamy July 24, 2019 00:00 IST Opinion: By Amending RTI Act, Govt Is Attempting To Subvert People's Power 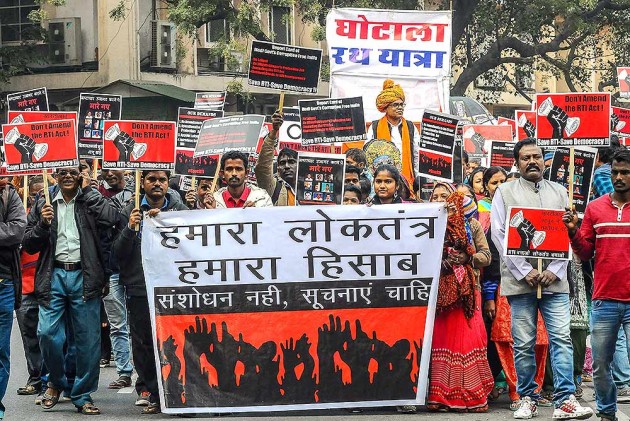 “We the people of India….adopt, enact and give to ourselves this Constitution”. The Preamble of the Indian Constitution articulated the intent of sovereignty and the status of all of us, as equal citizens. The Right to Information (RTI) Act is one of the few legislations brought out since independence that has transferred this concept from rhetoric to practice. It has enabled ordinary Indian citizens to claim their sovereign power every single day in thousands of ways - to ask questions and challenge opaqueness and the arbitrary use of power.

How do these amendments introduced to the RTI Act affect us as citizens and users?  Why are these amendments injurious to our access? All governments have been, are, and will be biased towards secrecy and worse, fabricate information to justify their ends.  RTI remains the only credible means left in our polity today to access facts of government functioning and therefore come closer to the truth. RTI also defines our right to freedom of expression in a simple clear and fundamental manner, from the individual to the collective. Governments may control and direct news, manipulate statistics, conceal sensitive information in the interest of “national security”. But it is almost impossible for a government to control and co-opt the nearly 50 lakh RTI applicants in a year, using RTI to seek information on a wide range of issues spanning from rations, pensions, shelter, life and liberty to teacher appointments in government schools, funds spent on road maintenance, coal contracts awarded to corporate conglomerates. Therefore, a strike is made to the closest thing possible – the Information Commissions.

The committee’s recommendation to elevate the status of Information Commissioners was accepted and passed by the Parliament unanimously through an extensive process of public and Parliamentary consultation. This was because in adjudicating between the government and the citizen, and in deciding whether information being sought warrants public disclosure, the Commissions play a critical role. It is very important in maintaining moral pressure on governments to constantly redefine the line between the private and the public, in an evolving democracy. The proposed amendments, by allowing the Centre to control and determine the tenure and stature of the Central and State Information Commissions, is an attempt to control them and hold them subservient to the wishes of the Executive. A seemingly benign intervention for administrative purposes is being made through Rules but is actually violating the essence of independence of the Commissions which has been written into Law. The government’s inclination to control the Commissions has prompted it to contradict federal principles, by handing to themselves to meddle with terms and conditions of the State Commissions too.

The RTI has been threatened with amendments by successive governments since its passage in 2005. However, the current government’s urgency in passing this amendment through its brute legislative majority is indicative of its fear of disclosure. Its attempt to dilute the autonomy of the Commissions is another example of its tendency to weaken independent bodies that check arbitrary application of power.

The RTI fundamentally legitimised questioning- the basic tool of all democratic rights. The damning of those who question as anti-state is a fallacy. These questions are against the malfunctioning of the government in its multiple manifestations. We have as proud Indians, internationally presented the Indian law as a shining example of Constitutional integrity. That the Indian RTI Act, fell from 1st place to the 3rd reflects only on the deliberate negligence of the government to ensure its efficiency in functioning.  With the elected government failing to uphold the promise of the RTI Act, it now left to the citizens and users of the Act to do all they can, to protect and strengthen its potential.

(Aruna Roy is a member of the Mazdoor Kisan Shakti Sangathan (MKSS) and Rakshita Swamy is with the Social Accountability Resource Unit. Both are affiliated with the National Campaign for Peoples’ Right to Information (NCPRI). Views expressed are personal.)