The PIB accreditation, which has, till now, allowed accredited correspondents to enter a ministry without having to sign in, or reveal whom they intend to visit, has preserved this anonymity. It has therefore been the essential catalyst in the creation of a vigorous civil society in India, writes Prem Shankar Jha 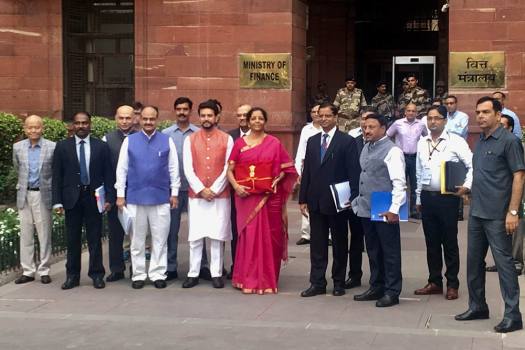 Finance Minister Nirmala Sitharaman’s reasons on the ministry asking PIB-accredited journalists to make prior appointments before entering the North Block may be honourable: The accreditation system was put in place in the very first years of independence, when there was no television, and no one had even thought of online journalism. The number of newspapers in the country and, therefore, the number of special correspondents covering each ministry was relatively small and the Indian languages press was a shadow of what it is today.

Today the number of PIB-accredited correspondents is much greater than it was in the 1950s and ‘60s. Journalists who cover the Ministry of Finance had therefore been asking for a waiting room in the North Block so that they are not being forced to loiter in the hallways for some time. Therefore, some form of order had to be brought into the system.

But Sitharaman’s decision that only journalists who have obtained a prior appointment with an official will be allowed to enter the Finance Ministry, and that the official they are meeting will  have to escort them to his room from the reception area, is a cure far worse than the disease, for it will destroy  the essential prerequisite of free, informed debate in the public of policies being contemplated by the government. It is the freedom of the journalists to protect the sources of their information, and of officials to ensure that alternative ways of achieving stated goals, that they would have liked to see adopted, get a public hearing.

The PIB accreditation, which has, till now, allowed accredited correspondents to enter a ministry without having to sign in, or reveal whom they intend to visit, has preserved this anonymity. It has therefore been the essential catalyst in the creation of a vigorous civil society in India.

This role, “of being India’s Fourth Estate,” did not develop by accident. Nor did it develop in the teeth of opposition from the State as it did in Britain, where, till the end of the 17th century, clandestine pamphleteers were regularly hanged, drawn, and quartered, and had their heads stuck on a pike at the city gate.

On the contrary it was actively encouraged by India’s first prime minister, Pandit Jawaharlal Nehru, who ensured balanced criticism by guaranteeing anonymity to correspondents with one hand while giving them and their editors government accommodation with the other. Nor in his or his daughter’s time did any journalist get threatened with a withdrawal of either of these privileges if he or she criticised the government.

All this has ended in Prime Minister Narendra Modi’s regime. The requirement that officials who are meeting journalists should escort them from the reception to their offices is nothing less than a covert way of destroying the freedom of the press. Prime Minister Modi began the process during his first incarnation when he installed CCTV cameras at the entrances to the ministries, and ended free access to the Defence, Foreign and Home ministries. Closing off the Finance Ministry will complete the political disempowerment of the media by ending the freedom of information in the last remaining, important, area of governance.

Sitharaman’s action must not therefore be seen in isolation, for it is one of a succession of decisions the new government has taken in the bare five weeks it has been in power, that seem expressly designed to terminate the democratic rights of its citizens. These include the ‘authorisation’ to Deputy commissioners to open internment camps for ‘non-citizens’ in all the districts of the country; the arrest of journalists for simply airing news that anyone in a central or state government can consider injurious to his or her reputation, the declaration of any anti-government opinion expressed in the media as anti-national, and the terrorising of independent TV and print journalists by levying criminal charges against them for  petty irregularities and misdemeanours.

The Modi government has launched this vendetta against civil society when the euphoria of victory has not even begun to ebb. What it will do to suppress dissent when it the discontent surfaces once again, as it inevitably must, does not bear thinking about. Suffice it to say that Sitharaman’s action is another reminder that we have entered the twilight years of our democracy. Only the realisation by our political class of the danger they and the nation face, and a steely determination to fight together to save our democracy can prevent its demise.

(Prem Shankar Jha is a journalist and author. Views expressed are his own.)