No alliance or party opposed to the BJP has talked of who may be fielded against Prime Minister Narendra Modi. Which is cited to buttress the assumption that Congress' Priyanka Gandhi may be weighing her prospects in Varanasi 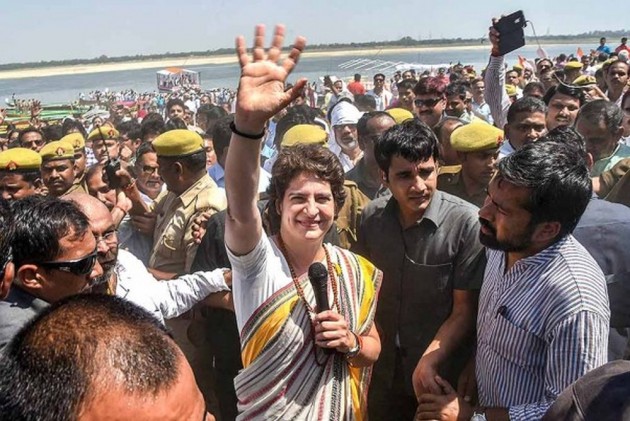 On April 22, when the nominations began for the last phase of polling on May 19, the question uppermost in the political circles were: Will Priyanka Gandhi Vadra file her papers to contest from Varanasi, Prime Minister Narendra Modi’s Lok Sabha constituency? The answer would be known by April 29, the last date for filing nominations.

Meanwhile, speculation is raging on whether Priyanka is serious about challenging Modi or just keeping up the suspense to play the Congress party’s rivals and the media. However, the buzz is that the Congress and the party’s first family are seriously weighing the pros and cons of fielding Priyanka Gandhi from Varanasi. No alliance or party opposed to the BJP has talked of who may be fielded against Narendra Modi. Which is cited to buttress the assumption that Priyanka may be weighing her prospects in Varanasi.

Although there is little doubt that Modi would trounce Priyanka in Varanasi, the advantage of optics would be loaded in the Congress general secretary's favour. The optics, in turn, would drive a Priyanka-centric narrative. Together, the optics and narrative would throw both Narendra Modi and the BJP on the back foot. As a result, the BJP would be forced into a defensive campaign mode. This would be a huge electioneering gain for Priyanka and her party as their visibility and the popularity would be greatly enhanced. Whether these translate into votes or not, post-election, the party would be better placed to rebuild itself for 2024 – when its prospects may be better if its score improves to three digits in 2019. In this election, the Congress party is not even contesting enough seats to emerge as the single largest party.

Consider the scenario in the event of Priyanka deciding to file her nomination.

One, her contesting from Varanasi would put paid to all accusations of the Congress not being serious about fighting the BJP. Once she files her papers, all talk of the Congress strategy being calculated to help the BJP and hurt the rest of the Opposition would lose credence. Willy-nilly, the Congress party would be at the forefront of the battle against the BJP.

Two, if Priyanka files her nomination first, Modi would have no choice but to contest from Varanasi lest it be said that he fled the field. She would steal the optics. Modi’s nomination event would become a predictable formality causing little excitement.

Three, Priyanka pitching for Varanasi would make it difficult for Modi to contest from a second Lok Sabha constituency. For then, Modi would be taunted for fleeing his parliamentary karma bhoomi and conceding defeat even before the battle has begun. Whether he sticks to Varanasi alone or contests from two places, his decision would be seen as having been forced by Priyanka. By this stage, the optics and the narrative would be in her favour.

Four, unlike Rahul Gandhi, Priyanka is a newcomer who is entitled to a honeymoon in politics. Many who despise the Congress as also those who root for Modi like her. She cannot be targeted in the crude ways and vulgar language of the current campaign. Keeping up the near-abusive tone, often just short of foul epithets, would hurt the BJP immensely and help Rahul Gandhi’s sister.

Five, whenever the BJP has gone in for a turbo-charged, high-voltage, no-holds-barred campaign against a newcomer -- be it in Delhi, West Bengal or Telangana – the party has come a cropper; and, actually failed to hold on to what it had. In the 2013 election to the Delhi Assembly, the BJP was the single largest party with 31 out of 70 seats. Aam Aadmi Party’s 28 MLAs formed the government with Congress support (8 seats). In the 2015 elections, the BJP went all out to finish AAP. Modi addressed four meetings during the campaign, which saw a score of Union ministers, over 100 MPs and BJP teams from other states unleash a high-powered and vicious campaign. Underdog AAP won 67 seats and BJP was left with a mere 3. If that lesson as any relevance in Varanasi, the BJP would do well to learn it properly.

Six, Prime Minister Modi, BJP chief Amit Shah, Chief Minister Adityanath Yogi, Home Minister Rajnath Singh and an array of the party’s top guns besides others of the ilk of Sakshi Maharaj, Maneka Gandhi and Pragya Singh Thakur unleashing against Priyanka the kind of campaign witnessed so far would actually help her in big and small ways. She would be seen as being under “heavy fire” from some of the heaviest hitters in Indian politics, thus causing a sympathy factor to kick in. It would give her a larger-than-life image – for being targeted by some of the most powerful and resourceful personalities. Taken together, a hard-hitting, crass campaign by bigwigs would raise her stature to stratospheric levels. Priyanka, even after she loses the election, would be seen not as a game-changer, but the game itself in post-2019 politics.

Seven, should the BJP and Modi desist from a high-pitched campaign against Priyanka – to underscore that she does not merit such attention – then the BJP runs the risk of conceding greater visibility, especially on TV at home and across the world, to Priyanka. Modi and his cohorts won’t be able to sleep well knowing that round the clock TV channels in India and abroad are beaming Priyanka – only because she is pitted against Modi.

Eight, Priyanka is a TV ‘natural’. Given a free hand between Priyanka and Modi, TV in India and worldwide would want more of the former and less of the latter. She is the more telegenic of the two; fresh, attractive, pleasant and captivating. For good measure, she projects to good effect her apparent political vulnerability; and, her hesitation and tentativeness in treading political ground where greater men and stronger foes are waiting to pounce on her and finish her off.

Nine, although lighter than a lightweight when compared to Modi, Priyanka would compel India’s biggest vote-getter to be tied down to Varanasi. For all the certainty of his victory, Modi would still need to invest more time, manpower and resources in Varanasi. He would have to strategise a calibrated campaign to not just defeat Priyanka but do it with a very high margin. Priyanka’s purpose is served by merely contesting the election. If she polls more than the two lakh votes Arvind Kejriwal got in 2014, it is an achievement.

Ten, if -- this is a VERY BIG IF – circumstances, including the wily ways of Varanasi’s wise Brahmins, conspire to give Priyanka a freak win, Modi and the BJP would never be able to live it down.

Shastri Ramachandaran is a political and foreign affairs commentator