Opposition members in the Rajya Sabha accused the government of helping the corporates, at the cost of the farmers. Opposition MPs claim that the Insolvency and Bankruptcy Code Bill helps defaulting corporates get away. 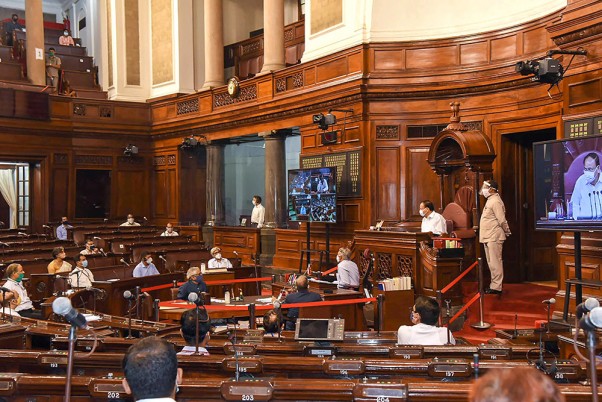 Opposition parties in the Rajya Sabha today, demanded the government to waive interest on loans obtained by farmers and individuals during the pandemic, citing a pause in insolvency proceedings against defaulting corporates.

Participating in a debate, K K Ragesh of CPI (M) said Finance Minister Nirmala Sitharaman and other members have told the House that the Insolvency and Bankruptcy Code (Second Amendment) Bill has been brought to save businesses and corporates. "Why is the same logic not applied in the case of farmers? Farmers are also bankrupt. Why is the government not taking any responsibility and any initiative in waiving the farmers’ loans?" he asked.
Ragesh suggested that the government could at least have considered to "waive the interest on farmers loans during the moratorium period”.

Initiating the debate, Congress member Vivek Tankha said that the government should protect only those businesses which are affected by Covid-19 pandemic and not all defaulters. He claimed that “Section 10-A in the Bill states that no application for initiation of the Corporate Insolvency Resolution Process (CIRP) shall be filed for any default, whether Covid-19 related or not, arising on or after March 25 for a period of six months or such period not exceeding one year form such date as may be notified.” The Congress leader asked the government whether it was sure that the coronavirus pandemic would end within a year. "When you are suspending Section 7,9,10, I think it's a makeshift solution to a long standing problem. There is no certainty that the economy will revive in one year,"Tankha commented. He pointed out that Gross NPA of banks went up from Rs 2.63 Lakh Crore in March 2014 to Rs 10.3 Lakh Crore in March 2018. "NPA and defaulting problems are pre-pandemic and Section 10-A would only postpone the problem and not solve it," Tankha said, adding that the creditors would be in a worse position with likely erosion in the value of assets. "The entire object of IBC Code is compromised by this amendment. The Code aims to prevent wilful default by companies. However, the blanket bar on Sec 7,9,10 will enable many companies which are already under defaulting categories to use the notification as a shield to protect themselves in future proceedings,” he said.

TMC member Dinesh Trivedi remarked that the need of the hour was to directly provide income to the poor rather than anything else. "We have record level of food stocks. Oil prices are historically low. The need of the hour is to put, maybe Rs 10,000 or Rs 15,000 or Rs 20,000, into the bank accounts of needy people," he said. Trivedi said this would help in creating demand, generating more jobs and more tax revenues for the government.