Asked about the Congress's role in the alliance, he said the party had a strong support base in states such as Rajasthan, Madhya Pradesh and Gujarat, where it would play the dominant role. 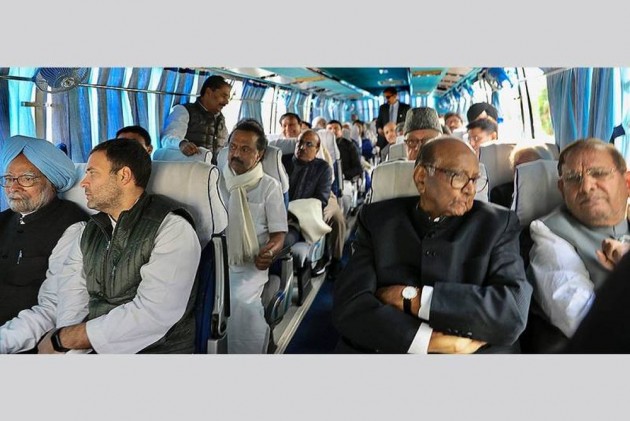 Saying that the previous Congress-led United Progressive Alliance (UPA) government had done well without projecting anybody as its leader before the 2004 general election, NCP supremo Sharad Pawar on Tuesday said there was no need to think about the prime ministerial candidate of the proposed grand alliance of Opposition parties before the Lok Sabha polls.

Pawar was among the opposition leaders who attended a mega rally organised by West Bengal Chief Minister Mamata Banerjee in Kolkata earlier this month.

"There is no need to think about the prime ministerial candidate now," the Nationalist Congress Party (NCP) chief told reporters in Ahmedabad.

"We (UPA) had not declared a candidate before the 2004 election. But we managed to give a successful government for 10 years," he said, when asked who would be the grand alliance candidate for the top post.

"What we are trying to do in the grand alliance is to stand behind a strong party in each state. For instance, in Tamil Nadu, the DMK is strong, all the other parties will stand behind it. In Andhra Pradesh, the TDP is strong and all others will support it to fight the BJP, while in Bengal, the Trinamool Congress is strong," Pawar said.

Asked about the Congress's role in the alliance, he said the party had a strong support base in states such as Rajasthan, Madhya Pradesh and Gujarat, where it would play the dominant role.

Speaking about Maharashtra, Pawar said the NCP and the Congress had arrived at an understanding as regards seat-sharing in most of the Lok Sabha segments.

"We have arrived at an agreement with the Congress on 44 of the 48 Lok Sabha seats. On the remaining four seats, the matter will be sorted out in the next week," he said.

All the opposition parties would probably meet in New Delhi on Wednesday for further talks, the former Maharashtra chief minister said.

He added that the ruling Bharatiya Janata Party (BJP) had failed to keep its promises.

"The Nehru-Gandhi family has committed sacrifices for the country. But the leader of the BJP is going all around the world abusing the family," Pawar later said, addressing NCP workers.

He, however, did not name Prime Minister Narendra Modi, who has been highly critical of the Nehru-Gandhi family.

The BJP government had failed on every front, including economy, the former Union minister said.