Riding high on her election victory in West Bengal, TMC's Mamata Banerjee wants to position herself as the fulcrum of Opposition unity. Can she succeed? 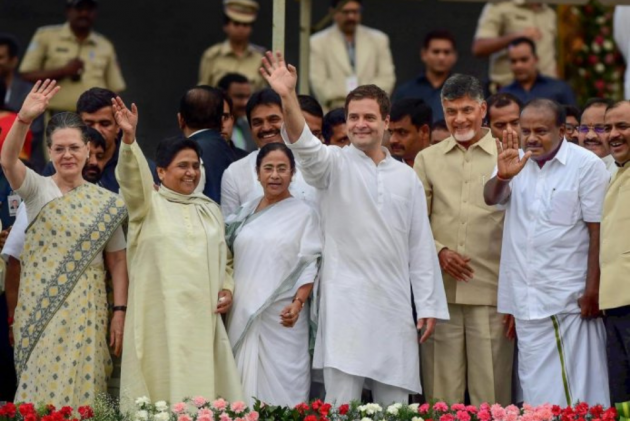 West Bengal chief minister Mamata Banerjee’s arrival in Delhi for a five-day visit to meet leaders of different Opposition parties has, yet again, triggered frenzied speculation on the possible recipe for a federal front to take on the BJP in the 2024 Lok Sabha polls. Riding high on her stupendous victory in Bengal despite the BJP’s visceral campaign, the Trinamool Congress chief wants to position herself as the fulcrum of Opposition unity; an altar that NCP supremo Sharad Pawar sought to covet exclusively until recently.

Banerjee’s scheduled meetings with interim Congress chief Sonia Gandhi, Pawar, Delhi chief minister Arvind Kejriwal and others over the next few days will be the first of many possible interactions that she plans to have with leaders of Opposition outfits in her avowed bid to unite non-NDA parties against the BJP.

The million-dollar question, of course, is whether Banerjee can succeed. All commentaries and conversations on a possible anti-BJP coalition have, invariably, hit a dead end on the question of who among the Opposition leaders has the political heft and electoral charisma to outflank the seemingly unassailable Narendra Modi in 2024. Banerjee too ducked this question on Wednesday after her meeting with Sonia Gandhi.

There is, however, some unanimity in the notion among various stakeholders in the Opposition that for a federal front to really work, each constituent must first agree to a poll strategy wherein the more dominant political force in each state takes the lead in fighting the BJP. Parties with a limited base must, thus, forfeit demands for seats disproportionate to their grassroots presence – something like the understanding that the DMK and Congress struck in Tamil Nadu earlier this year as against Opposition alliance put up in Bihar last year where the Congress got way more seats than its worth and ultimately hamstrung the RJD from defeating the BJP-JDU combine.

To this end, the votaries of a federal front first need a person who has the gravitas to make all other Opposition leaders heed her/his advice, who is not viewed by rival Opposition satraps as someone personally eying the top post and one who can work silently behind the scenes to patiently massage the massive egos of each head of an Opposition party when matters hit a stalemate, as they are bound to do. The Opposition front doesn’t immediately need to identify a Morarji Desai or VP Singh – the early faces of such federal formations, who succeeded in becoming prime minister only to fail miserably in keeping the chair. The priority for the Opposition, instead, must be to first find a new age avatar of Jayaprakash Narayan (JP) or the late CPM stalwart Harkishan Singh Surjeet.

Banerjee’s arrival in Delhi had, no doubt, been preceded by some leg work on the Opposition unity plan. Her poll strategist in Bengal, Prashant Kishor, had held three meetings with Pawar setting off rumours of a possible federal front sans the Congress. Pawar, of course, dismissed the speculation. A few weeks later Kishor was seen meeting Congress leaders Rahul Gandhi and Priyanka Gandhi Vadra triggering tittle-tattle on his possible induction into the Grand Old Party or, at least, working with the Gandhis to revive their electorally atrophying party. The Congress, despite its internal chaos, has shown a sense of urgency in reaching out to various Opposition parties and, as a first step, identified issues that these outfits can unite around to corner the BJP.

This is evidenced in the Congress taking the lead in reaching out to Opposition parties during the ongoing monsoon session of Parliament to chalk out a united onslaught against the BJP on issues such as the controversial farm laws and resultant peasant protests, rising inflation and food prices as well as the Pegasus snooping scandal. However, it is one thing for Opposition parties to unite during a Parliament session to corner the government and entirely another to come together electorally to stop the mighty BJP poll apparatus. It is on the latter that the absence of vintage figures like Narayan and Surjeet is felt the most.

Given how far India has regressed in its moral, syncretic and socio-political milieu since the 1970s, a new age JP who can unite disparate outfits with a call for Sampoorn Kranti (total revolution) would be almost impossible to find. Chances are that a leader even mimicking such a call may be put behind bars on charges of sedition, UAPA, NSA, etc. What may, thus, be more realistic is for the Opposition to actively search their ranks for someone with the Machiavellian streak of Surjeet, the master conductor of coalition orchestras from the days of VP Singh’s premiership in 1989 up until the post-poll formation of the UPA that came to power in 2004 after the surprise defeat of the Atal Behari Vajpayee-led NDA government.

Surjeet’s strength in getting temperamental satraps to a common platform did not lie in his own ability to win elections or sway public sentiment – he, in fact, never contested a direct election to an Assembly or the Parliament and had served as a Rajya Sabha MP just once (between 1978 and 1984). Instead, it was Surjeet’s lack of ambition in holding any major political post coupled with an uncanny ability to accurately gauge what slice of the power pie different satraps want and to leverage his personal equations with them that helped the late Comrade unite even the most bitter rivals behind a common cause.

Surjeet’s experiments with cobbling together coalitions may not always have been successful in ensuring that the men who led these formations continued in office for a full five year term. VP Singh lasted in office for just short of a year as did HD Deve Gowda and IK Gujral. Manmohan Singh completed his first term but after a bitter falling out with the Left parties weeks before Surjeet passed away at the age of 92 years in August 2008. Singh returned to office for a second consecutive term in 2009 but without the support of Surjeet’s CPM or the other Left outfits.

Of course, Surjeet had his share of upsets too. He failed in realising his dream of seeing a Communist Prime Minister when his own party men nixed Jyoti Basu’s shot at the premiership in 1996 leading to the surprise selection of Deve Gowda to lead the evidently disunited United Front government. After Gowda’s ouster within a year, Surjeet was once again unsuccessful – this time apparently due to sabotage by Lalu Prasad Yadav, Chandrababu Naidu and Sharad Yadav – in installing Mulayam Singh Yadav as the PM. As a result, Gowda was succeeded by IK Gujral, who too couldn’t last in office beyond 11 months.

Though the coalitions Surjeet was instrumental in cobbling together lacked longevity, his success in getting incongruent parties together as the first step towards government formation cannot be discounted. It has been fairly evident that Opposition parties today lack a binding force like Surjeet who can make them take even that first step.

While Pawar may fancy himself as the Surjeet of the 2020s and have as a bonus a formidable track record at power politics, it is no secret that various Opposition leaders, particularly those in the Congress, see in him a wily neta who covets the top post for himself. Besides, Pawar constantly sends mixed signals of his political intent through public displays of bonhomie with Narendra Modi. Banerjee, on the other hand, has emerged as a trenchant Modi-critic and leads a big state that can help the Trinamool add a chunk of Lok Sabha MPs to the Opposition’s kitty against the BJP. However, her mercurial ways coupled with preoccupation in personal political battles against an aggressive BJP in Bengal are likely to prevent her from devoting the next three years towards the Opposition unity project.

Opposition satraps like Chandrababu Naidu or the ailing troika of Mulayam Singh Yadav, Lalu Prasad Yadav and Sharad Yadav simply aren’t in the game of playing the grand puppeteers anymore for various reasons – both personal and political. Naveen Patnaik, Mayawati and Jagan Mohan Reddy – though technically Opposition leaders – seem more invested in bailing the BJP out from tricky situations than helping its rivals. MK Stalin appears too occupied in proving himself as the worthy successor of his father M. Karunanidhi’s legacy in Tamil Nadu, and is perhaps happy allowing Rahul Gandhi and the Congress remain the BJP’s principal alternative nationally. The CPM’s Sitaram Yechury, a pragmatic Leftist like Surjeet, could have done the trick had he not been hamstrung by rival factions within his own party.

An unusual but interesting choice to fill in the void left by Surjeet could be Dr. Manmohan Singh. The former prime minister, though not in the best of health and scarred by the wounds inflicted by his tumultuous scam-tainted second term in office, commands the respect of almost every Opposition leader. Singh’s statements chiding the Modi government on various issues, particularly the havoc wreaked on India’s economy and the deepening social and communal divides under the BJP regime, still make headlines. As someone who clearly nurses no ambition of returning to office but symbolises the statesmanship that the Opposition believes India has lost under Modi, Singh is best suited to play the role of a mentor to votaries of a federal front. The Congress and other Opposition parties can, of course, offer him a team of negotiators from within their ranks - or even a Prashant Kishor - who have the time, experience and political savvy for an exercise as complex as stitching together a sustainable federal front. A tall ask?