He also clarified that India lost only one aircraft due to Pakistan's 'unsuccessful attempt' at targetting Indian military installation in Jammu sector. 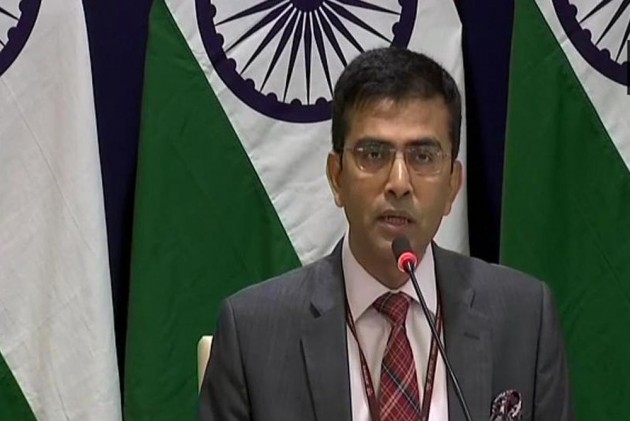 Pakistan must show "credible, verifiable and sustained action" against terror groups operating from its soil,  India said on Saturday and regretted that Islamabad continues to deny the Jaish-e-Mohammad's own claim of taking responsibility for the Pulwama terror attack.

Ministry of External Affairs spokesperson Raveesh Kumar, addressing a briefing, said: "It is regrettable that Pakistan still continues to deny Jaish-e-Mohammed's own claim of taking ownership of Pulwama attack. The Pakistan Foreign Minister (Shah Mehmood Qureshi) said 'they(JeM) have not claimed responsibility for the attack,  there is some confusion. Is Pakistan defending the JeM?"

"We have also shared evidence in the form of parts of AMRAAM missile which were recovered from the site and are only carried by F-16 aircraft of the PAF," he said.

The Pakistan Foreign Minister Qureshi had on March 2 said in an interview to BBC that the JeM has not claimed responsibility for the February 14 Pulwama attack in which 14 CRPF personnel were killed, and there is a farrago behind the attack.

“They deny that… they claimed no responsibility... there’s confusion. There are conflicting reports on it," Qureshi told BBC.  He had earlier claimed that JeM chief Masood Azhar is in Pakistan and unwell.

Amid conflicting reports on the success of India's February 26 cross-LoC airstrike in Balakot, Kumar said that India's non-military strike on a Jaish-e-Mohammad camp in Balakot in Pakistan "achieved its objective", and that there has never been an escalation of hostilities by New Delhi.

"Our non-military strike on a JeM camp in Pakistan achieved its objective."

#WATCH Ministry of External Affairs (MEA) Spokesperson, Raveesh Kumar: If Pakistan claims to be a 'Naya Pakistan' with 'nayi soch' then it should demonstrate 'naya action' against terrorist groups and cross border terrorism in support of its claims. pic.twitter.com/Ji7ZBZsVjc

"There was never an escalation from our side. Our strike was not a military operation, but a counter-terror operation necessitated by the lack of action by Pakistan on perpetrators of the Pulwama attack, and in the wake of credible information of more attacks planned."

He also clarified that India lost only one aircraft due to Pakistan's "unsuccessful attempt" at targetting Indian military installation in Jammu sector.

Kumar also said if, as Pakistan claims, it has evidence of downing of second Indian aircraft then why has it not shared it.

R Kumar, MEA: It is regrettable that Pakistan still continues to deny Jaish-e-Mohammed's own claim of taking ownership of Pulwama attack. Pak Foreign Minister said 'they(JeM) have not claimed responsibility of the attack, there is some confusion' Is Pakistan defending the JeM? pic.twitter.com/xYkoZ4w2yW

The MEA said that the international community has stood by India in the wake of the February 14 Pulwama attack in which 40 CRPF personnel were killed in a Jaish-e-Mohammad suicide bombing.