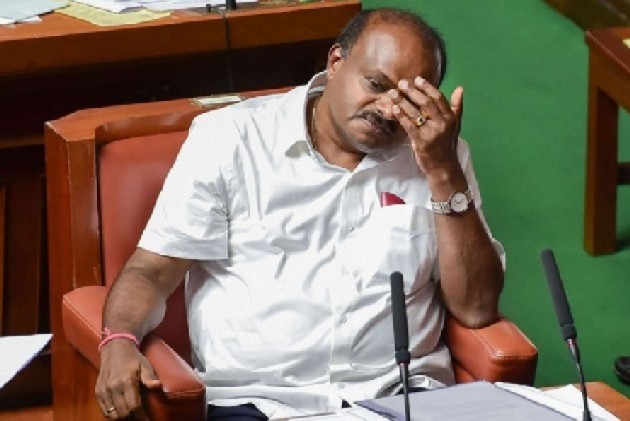 Kumaraswamy rubbished the reports about JD(S) extending support to BJP.

He tweeted, "I have gone through the baseless report about (JDS) developing relationship with BJP. Our party MLAs and workers should not give ear to such rumours.

We will build the party by serving the people. Our pro-people struggle is continuous."

Gowda made the party position clear a day after a section of JD(S) legislators asked former Chief Minister H D Kumaraswamy to extend support to the BJP government.

After a meeting of JDS MLAs on Friday, party senior leader G T Devegowda had said "Some have suggested that we should sit in opposition, while some legislators are of the opinion that we should support the BJP from outside."

"We are going to play a constructive role. As a regional party we will oppose where we have to oppose. That's all. If you (Yediyurappa) do something good for the state, we  welcome it," Deve Gowda told reporters in Bengaluru.

The JDS patriarch said, "There is no big deal in saying so (support to BJP). His (H T Devegowda's) intention was that the finance bill was passed (before July 31) because it was a budget presented by Kumaraswamy."

Gowda explained that G T Devegowda intended to say that the JD(S) would not oppose every move of BJP just for the heck of it.

"The pain of losing power within 14 months instead of 60 months (five years) is evident among Congress and the JD(S) leaders. Hence, G T Devegowda expressed his views. What's the big deal in it? Isn't it his right to express views?" he said.

Senior Congress leader Siddaramaiah on Saturday said the government of the BJP in Karnataka was not "constitutionally or ethically formed" and called it "a victory of
horse-trading."

Siddaramaiah, who is the leader of the Congress Legislature Party, accused the BJP of "misusing" the office of Governor to form the government.

"Yediyurappa taking oath itself is against the constitution by misusing the office of the governor though they don't have the majority," he told reporters in Bengaluru.

Explaining the equation, he said the strength of the Assembly after the disqualification of three MLAs was 221 and the halfway mark was 111. However, the BJP has only 105.

Asserting that the BJP has to give the list of 111 MLAs, Siddaramaiah underlined the fact that the names of rebel MLAs camping in Mumbai cannot be given as they were from Congress and the JD(S).

"This (BJP's) is not a constitutionally or ethically formed government. How will they (BJP) prove majority then? Has it got any recognition within the framework of constitution?" Siddaramaiah asked.

He said the H D Kumaraswamy-led coalition government would not have collapsed if the Congress and JD(S) MLAs were not confined.

The former chief minister claimed that two rebel MLAs had called him regarding their disqualification but he did not receive their calls.