As soon as the seven accused in Bulandshahr lynching stepped out of jail, they were garlanded and greeted with slogans of 'Bharat Mata Ki Jai' and 'Vande Mataram'. 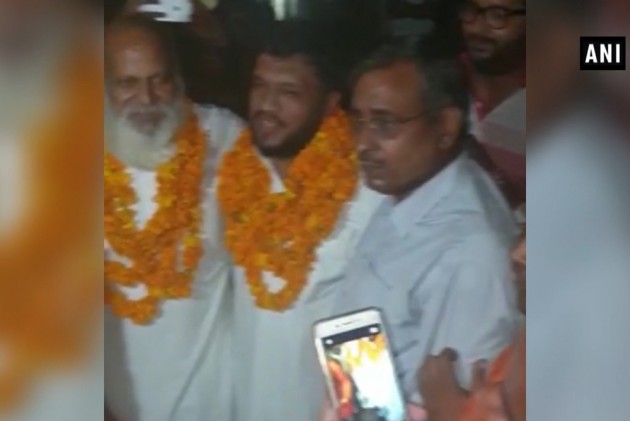 In a shocking development, seven persons accused of killing a police inspector in cow slaughter violence in Bulandshahr last year, were given a hero's welcome by their supporters when they came out on bail.

As soon as they stepped out of Bulandshahr Jail on Saturday night, the seven accused were garlanded and greeted with slogans of 'Bharat Mata Ki Jai' and 'Vande Mataram'. Later, the supporters also threw a "welcome party" in "honour" of the seven men.

The matter came to light after a video of the 'party' was shared on the social media on Sunday night.

Shikhar Agarwal, a member of Bhartiya Janata Yuva Morcha (BJYM) and Jitendra Malik, an Army personnel were among the seven accused released on bail.

They are accused in a case of mob violence that took place on December 3 after a cow carcass was found in a sugarcane field near Mahav village of Siyana in Bulandshahr.

Subodh Kumar Singh, the station house officer of Siyana, and local youth, Sumit Kumar, were killed in the violence and Chingrawati police picket was set on fire.

Senior Superintendent of Police of Bulandshahr Santosh Kumar Singh said those released were not facing stringent sections and were booked for rioting and not murder.

Malik, an Army man from 22 Rashtriya Rifles and posted in Sopore, Jammu and Kashmir, was arrested by the Uttar Pradesh Special Task Force (UP STF) on December 9 after his name came up as the main conspirator who killed inspector Subodh Kumar Singh. But, he was not chargesheeted for the murder.

"We had approached the High Court to seek relief following which seven accused were granted bail. Jitendra Malik has also reported to the Army base in Meerut's Babugarh area after his release," said Sanjay Sharma, Malik's advocate.

Bhartiya Janata Yuva Morcha leader Agarwal was arrested in January this year from Hapur district after he remained absconding for over a month.

Support among sections for people accused of killing or inciting violence is not new. In 2017, Shambhu Lal Raigar, a marble trader, who was accused of killing a Muslim labourer in Rajasthan and also of filming the brutal act, became an instant celebratory of sorts  among a section of people.

The police had to freeze his bank account after he received "donations" to the tune of Rs 3 lakh from around 516 "sympathisers" from across the country.