Out On Parole, Akhil Gogoi Meets Ailing Mother In Jorhat

He was returning home after one-and-a-half years since he was arrested on December 12, 2019 for his protests against CAA. 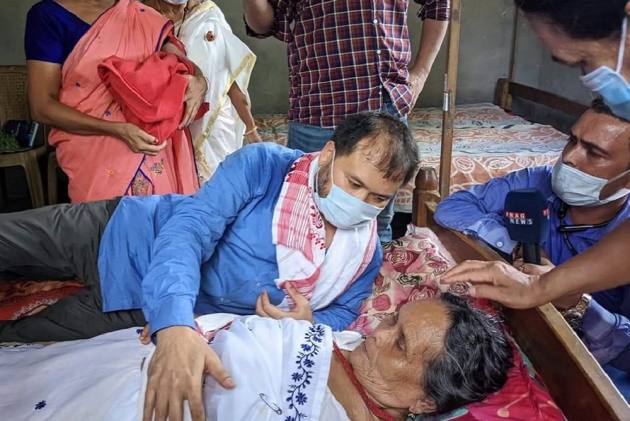 Eighty-four-year-old Priyada Gogoi has been waiting with Rs 30 stashed in a small bag. She will give it to her son and jailed Sibsagar MLA Akhil Gogoi when he returns to Gauhati Medical College and Hospital on Sunday after spending the night with her at Lukurakan village in Jorhat district.

Akhil reached the village past noon on Saturday on a two-day parole granted to him to see his son and mother. He was returning home after one-and-a-half years since he was arrested on December 12, 2019 for his protests against CAA. He spent Friday night with his wife and son at their home in Guwahati before leaving for the village on Saturday morning. They were not allowed to accompany him to the village. Akhil is undergoing treatment at Gauhati Medical College and Hospital from where he was taken to his rented house in Guwahati around 10 pm.

The welcome at the village was tumultuous as his convoy packed with escorting policemen reached. “It has been so long,” Akhil said. “I just wish to place my head on my mother’s chest and take long breaths,” he said embracing her tightly as tears flowed from her cataract-afflicted eyes. “Why are you crying?” he asked. His mother had hit the street campaigning for him as he remained imprisoned and eventually becoming the first candidate to win an election from behind bars in Assam.

“Here I promise touching my mother that I will never be a corrupt MLA, I will go on working for the people. I have seen what struggle is and I will strive to see none other has to experience that,” he said adding that he wanted to visit his constituency but that was not possible this time. A large number of people had come down from Sivasagar to meet and discuss the constituency’s issues with him.

The NIA special court while granting him parole for 48 hours to visit his son and mother forbade him to proceed to Sivasagar because of the pandemic situation.

There was anger among a section of the crowd gathered against Rupjyoti Kurmi, who won from Mariani – for the fourth consecutive term-- on a Congress ticket in the last assembly elections, but has since resigned from the assembly and joined the BJP. Akhil had withdrawn his nomination from Mariani in favour of his “brother.”

“Before the elections, Kurmi had described those who had left the Congress and joined the BJP as ‘gaddar’ (traitor) and showered the choicest of expletives on them. Did he mean all that for himself as well?” asked one. “He will not win in the by-election this time,” he said.

Kurmi, like Akhil, has had the streak of rebel in him and was a strong voice of the Opposition Congress, which he left because he was denied any responsible position.
Akhil was acquitted in one of the two cases against him recently, which included charges under the UAPA. Hearing on framing of charges in the second case – at Chandmari police station in Guwahati -- is under way.

He was earlier allowed to attend the assembly session for a day for the swearing-in as MLA.