Ahead Of Eid, police out with hockey sticks, officials with sticks to maintain order 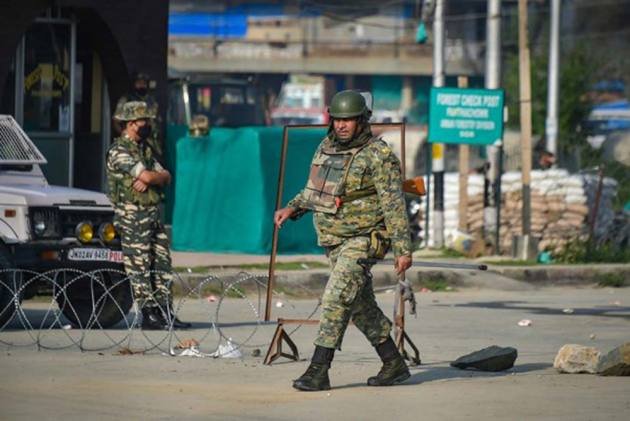 Police in Srinagar, in their zeal to impose corona curfew ahead of Eid, were seen beating women with sticks for violating restriction orders on Wednesday, prompting sharp reactions. They also forced shops selling meat and vegetables to down shutters.

The policemen were carrying hockey sticks to impose the curfew. In many areas, including Batmaloo, a police vehicle was seen chasing youths. At many places, police toppled vendor carts.

In north Kashmir’s Baramulla, additional district commissioner Mohammad Ahsan Mirwas himself restricting the movement of pedestrians. Videos of him beating up women with a long stick and abusing people have gone viral. The officer, whose action evoked condemnation from all quarters, defended himself saying he was sending out a stern warning to those people who were unnecessarily roaming in the market. However, the videos show the officer chasing women and beating them with his stick.

In Srinagar and other areas, the police forced meat and bakery shops to down shutters. “DDMA Srinagar asked for testing of all bakery workers. Out of 99 samples, 8 have tested positive on RTPCR. Mostly from renowned Bakery shops. Let’s stay indoors. #coronavirus has unique art of locating the right person,” Srinagar deputy commissioner Aijaz Asad tweeted.

Lawyers and civil society activists condemned action of the official.

“Anywhere this unbecoming and rowdy behaviour of the officer would have ensured at least a suspension for him but in Kashmir, officials would pull out hundreds of reasons to legitimise such action. Beating women, oh yeah, ain't an issue here. It is normal,” senior journalist Mufti Islah tweeted.

“This video from Baramulla is beyond shame. Additional divisional commissioner beating a woman with a stick for violating Corona lockdown. This video posted by a local news agency has been removed from the page. #Kashmir,” tweeted Haziq Qadri.

As the government has said it will look into the context under which the officer has taken the action and then will comment on it, political analyst Gowhar Geelani tweeted, “The bigger Babu will ‘look into the context’ to determine why a moron had used stick to beat women and kicks to thrash men. After inquiry, it could be established that despite provocation from the people the officer on duty ‘exercised restraint’. That is the key line since 1989.”

“Britishers invoked civil services bcoz they needed only clerical skills sans intellect and critical thinking rest is history and today's act is a living example. A mindset that can never b reset,” reads a tweet of a doctor.

The government has deployed extra security forces ahead of Eid-ul-Fitr likely to be celebrated on Thursday or Friday to enforce Covid curfew.

In north Kashmir’s Bandipora district, deputy commissioner Dr Owais Ahmad held an interactive meeting with prominent religious leaders and imams of the district. “The interaction was held in view of the upcoming Eid festival and the DC sought the cooperation of religious leaders in ensuring Covid-appropriate behavior by ensuring social distancing,” a government spokesman said.

Meanwhile, CPM state secretary Ghulam Nabi Malik on Wednesday demanded immediate financial assistance for labourers, daily-wagers, artisans, and other people affected by the frequent lockdowns in the past two years in Jammu and Kashmir. “The artisans working in J&K constitute a considerable percentage of total employment group in the region. The lockdown has made the survival of thousands of families who are dependent on the handicrafts sector difficult. People are eking out a tough existence in Kashmir. Daily wagers are not able to find work to feed their families. Thousands of traders have been unable to pay their staff or keep them on their rolls,” he said.