The Mirwaiz was addressing prayers at the Jama Masjid here on the occasion of 'Jumat-ul-Vida', the last Friday of Ramzan. 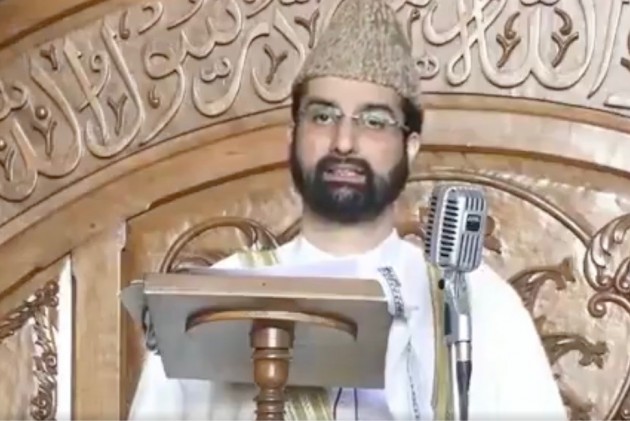 The overwhelming mandate to Prime Minister Narendra Modi has given him an opportunity to play a decisive role in the resolution of the Kashmir issue, Hurriyat Conference chairman Mirwaiz Umar Farooq said on Friday.

Last Friday of Ramzan,Jumatul Vida observed with religious fervour across Kashmir,largest gathering at #JamaMasjid were thousands of faithful assembled. As people of India overwhelmingly voted for Mr. Modi,this mandate gives him opportunity &power to play a decisive role in the.. pic.twitter.com/os6KJRTEvx

"As the people of India overwhelmingly voted for Mr Modi and his party back into power, this mandate gives PM Modi the opportunity and the power to play a decisive role in the resolution of the long-pending Kashmir conflict," the separatist leader said.

resolution of Kashmir conflict which has consumed generations of Kashmiris.This issue cannot be solved militarily or through confrontation but by dialogue & deliberations and PaksitanPM Imran Khans oft repeated offer of dialogue should be seriously considered by new dispensation pic.twitter.com/SdYWgqvEJd

The Mirwaiz was addressing  prayers at the Jama Masjid here on the occasion of 'Jumat-ul-Vida', the last Friday of Ramzan.

Hurriyat is willing to support every such initiative which aims at a peaceful resolution of the dispute keeping in view the sentiments of people of Kashmir,the main stakeholders and which puts an end to decades of loss and suffering inflicted on them due to the lingering conflict pic.twitter.com/gOKyek77al

"Pakistan PM Imran Khan's oft-repeated offer of dialogue on all issues between India and Pakistan, including on the Kashmir issue, should be seriously considered by the new dispensation in New Delhi as the way forward," Farooq said.

The moderate Hurriyat chairman said Kashmir cannot be resolved militarily or through confrontation, but by dialogue and deliberations.

"All Kashmiris, irrespective of their organisational affiliations, are speaking in one voice about the urgent need for resolution of the conflict," he said, adding that the Hurriyat Conference was willing to support any initiative in this regard.

"So, it is an opportune time to initiate political processes which enables and facilitates conflict resolution," he added.

The separatist leader said a resolution to the Kashmir issue could transform both India and Pakistan and usher in a new era of stability and progress in South Asia, bringing the much-needed relief to the people of Kashmir striving for a resolution.

"For that, it is imperative that democratic processes are invoked and restored by New Delhi and the policy of repression and military approach be done away with.

"One measure for doing so is the release all of all political prisoners languishing in various jails across India, including (separatist leaders) Yasin Malik, Shabir Shah, Asiya Andrabi and others," he added.

The mirwaiz said during the Hurriyat's engagement with the governments of Atal Bihari Vajpayee and Manmohan Singh, and after visiting Pakistan, the separatist conglomerate had put forward certain substantial measures as a precursor to serious negotiations.

Farooq claimed that both India and Pakistan had at that time agreed to implementing these steps -- including revocation of the Armed Forces (Special Powers) Act, gradual demilitarisation, prisoner release -- to prepare ground for serious negotiations.

"These measures hold true even today when the situation has only further deteriorated," he said. "If these steps are initiated by both sides, it will bring relief to the people of Kashmir and an atmosphere for sincere engagement among all stakeholders will be created for a permanent resolution."

The Hurriyat chairman said India and Pakistan have to acknowledge and address "the unresolved political problem" in Kashmir.

"We want this long cycle of killings and violence to end. We do not want to see our youngsters or an Indian or Pakistani soldier die in this 'forever' conflict," he said. "Without addressing the question of Kashmir, there will be repeated returns to perilous states of war as we recently witnessed."