We must never countenance sanctuaries for terrorists or overlook their raising of resources, External Affairs Minister S Jaishankar said. 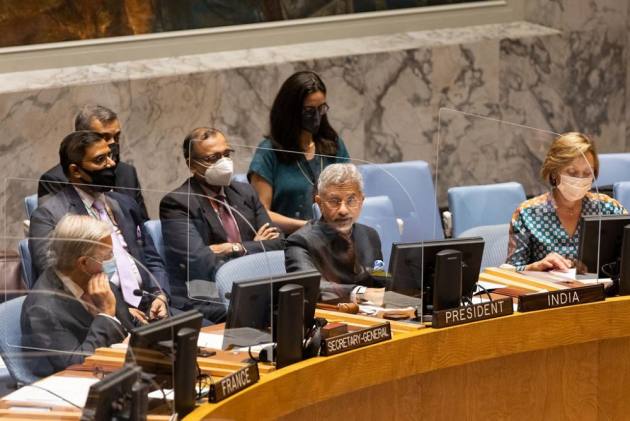 Pak-based terror groups like the LeT and JeM continue to operate with both impunity and encouragement, India told the UN Security Council on Thursday.

Asserting that the international community must never host sanctuaries for terrorists as it recalled the 2008 Mumbai terror attack, Pathankot air base and Pulwama attacks carried out by Pakistan-based terrorists, External Affairs Minister S Jaishankar said the heightened activities of the proscribed Haqqani Network justifies this growing anxiety.

Chairing a high-level United Nations Security Council briefing on ‘Threats to international peace and security caused by terrorist acts’ held under India’s current presidency of the UNSC, the minister said, “In our own immediate neighbourhood, ISIL-Khorasan (ISIL-K) has become more energetic and is constantly seeking to expand its footprint. Events unfolding in Afghanistan have naturally enhanced global concerns about their implications for both regional and international security.”

“Whether it is in Afghanistan or against India, groups like Lashkar-e-Taiba (LeT) and Jaish-e-Mohammed (JeM) continue to operate with both impunity and encouragement,” Jaishankar said.

It is therefore vital that the Security Council “does not take a selective, tactical or complacent view of the problems we face,” the External Affairs Minister said.

“We must never countenance sanctuaries for terrorists or overlook their raising of resources,” he said.

Speaking in his national capacity, Jaishankar -- slamming Pakistan where proscribed UN terrorists and terror groups enjoy safe havens and state support -- said: “when we see state hospitality being extended to those with innocents’ blood on their hands, we should never lack the courage to call out this double-speak.”

The UNSC briefing considered the 13th report of the Secretary General on the threat posed by ISIL (Da’esh) to international peace and security.

The August 3 report states that the Islamic State in Iraq and the Levant – Khorasan has expanded its presence in several provinces of Afghanistan and strengthened its positions in and around Kabul.

The report said that one of the main risks identified by member states is that "militants in Afghanistan, from the Taliban or other groups, may join the Da’esh affiliate if they feel alienated or threatened by developments in the Afghan peace process.”

Davood Moradian, Director General of the Afghan Institute for Strategic Studies, who escaped from Kabul as the Taliban took control of the country, also addressed the UNSC meeting and told the Council that one of the passengers that fell to the ground from a flying US plane was reportedly a member of Afghanistan national football team.

Jaishankar said that in India’s own immediate neighbourhood, ISIL-Khorasan (ISIL-K) has become more energetic and is constantly seeking to expand its footprint.

“This should be taken seriously. Events unfolding in Afghanistan have naturally enhanced global concerns about their implications for both regional and international security,” he said.

He told the Council that ISIL’s modus operandi has changed, with the core focusing on regaining ground in Syria and Iraq and affiliates functioning independently.

“This evolving phenomenon is extremely dangerous and poses a new set of challenges to our collective efforts in our fight against ISIL and terrorism,” he said.

The meeting came as the world gears to commemorate next month 20 years of the horrific 9/11 tragedy in New York.

“We, in India, have of course had more than our fair share of challenges and casualties. The 2008 Mumbai terror attack is imprinted in our memories. The 2016 Pathankot air base attack and the 2019 suicide bombing of our policemen at Pulwama are even more recent,” Jaishankar said, expressing solidarity with victims and their families all over the world who have suffered, and continue to suffer, from the scourge of terrorism.

“We must never compromise with this evil,” he said.

In a swipe at China, Jaishankar told the Council that countries should not place blocks and holds without any reason on requests to designate terrorists, warning that any double standards and distinctions between terrorists would be made only at "our own peril”.

Jaishankar alluded to his remarks to the Council made in January when he had proposed an eight-point action plan aimed at collectively eliminating the scourge of terrorism.

“Summon the political will: don’t justify terrorism, don’t glorify terrorists; No double standards. Terrorists are terrorists; distinctions are made only at our own peril; Don’t place blocks and holds on listing requests without any reason,” he said.

This was in reference to China repeatedly placing technical holds on bids by India and other nations to designate head of Pakistan-based militant group Jaish-e-Mohammed Masood Azhar.

The United Nations designated Azhar as a global terrorist in 2019 after China lifted its hold on a proposal to blacklist him under the Security Council’s Sanctions Committee, slapping an arms embargo, asset freeze and travel ban on him, ten years after India first moved to have him blacklisted at the UN.

Jaishankar also called for discouraging “exclusivist thinking" and be on guard against new terminologies and false priorities.

He stressed that enlisting and delisting should be done objectively, and not on political or religious considerations. The international community should also recognise the linkage to organised crime, support and strengthen the FATF, and provide greater funding to UN Office of Counter Terrorism.

“I call on this Council to collectively build on these principles. It is also important therefore to end the stalemate preventing the adoption of a Comprehensive Convention on International Terrorism, which India has championed for so long,” he said.

Jaishankar stressed that the international community holds a collective view that terrorism in all its forms and manifestations must be condemned.

“There cannot be any exception or any justification for any act of terrorism, regardless of motivations behind such acts. We also recognise that the menace of terrorism cannot be and should not be associated with any religion, nationality, civilization or ethnic group.

“However, in spite of the progress we have made to tighten the legal, security, financing and other frameworks to combat terrorism, terrorists are constantly finding newer ways of motivating, resourcing and executing acts of terror. Unfortunately, there are also some countries who seek to undermine or subvert our collective resolve to fight terrorism. That cannot be allowed to pass,” he said.

Noting that the latest report of the Secretary General has provided another stark reminder that ISIL (Daesh) continues to pose a critical threat to international peace and security, he said the financial resource mobilization of ISIL (Daesh) has become more robust.

“The flow of funds has continued and rewards for killings, I believe, are now even being paid in Bitcoins! The radicalization of vulnerable youth by systematic online propaganda campaign remains a serious concern,” Jaishankar said.

He also drew parallels between the COVID-19 pandemic and the scourge of terrorism, telling the powerful 15-nation UN body that “let us always remember that what is true of Covid is even more true of terrorism: none of us are safe until all of us are safe.”

Saeed-led Jamat-ud-Dawah (JuD) is the front organisation for the LeT which is responsible for carrying out the 2008 Mumbai attack that killed 166 people, including six Americans.

India's most wanted terrorist Azhar has been charge-sheeted in several cases from the 2001 Parliament attack to the 2019 Pulwama suicide bombing.