“I assured Sushma Swaraj and Narendra Modi that Pakistan won’t allow use of its soil against India,” Vankwani said. “We need to build confidence between the two nations.” 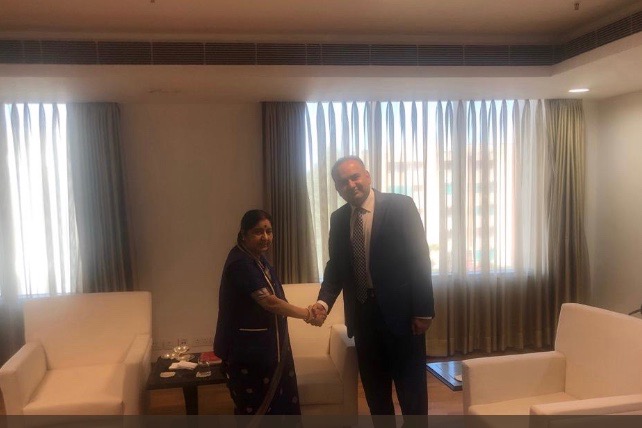 As part of backchannel talks, a Pakistani Hindu lawmaker on a visit to India said he has assured the Indian leadership that Pakistan won’t allow the use of its soil against India and that his country’s government and institutions were not involved in the Pulwama terror attack.

Ramesh Kumar Vankwani, a parliamentarian of the ruling Pakistan Tehreek-e-Insaaf (PTI), told Samaa Digital over phone from New Delhi: “I told them that I came to India with a message of peace. Modi ji (Prime Minister Narendra Modi) was very excited to see me.”

Dr.Ramesh Kumar Vankwani, Pakistan MP: Thank Indian Govt for warm welcome accorded to me, I met VK Singh ji, PM Modi and held discussions with Sushma ji. I assured that there is no Pakistani involvement in #PulwamaAttack .We should move in a positive direction,we want peace. pic.twitter.com/8De3HdNokR

“I assured Sushma Swaraj and Narendra Modi that Pakistan won’t allow use of its soil against India,” Vankwani said. “We need to build confidence between the two nations.”

“I have told them that the Pakistan government and institutions were not involved in the Pulwama attack,” the PTI lawmaker told Samaa.

“Pakistan is taking action against all the outlawed organizations,” Vankwani added. “I told them that I am coming to meet you after ‘Ganga-snaan’ and I won’t lie to you; we will not allow anyone to conspire against you from our dharti (land).”

The Pakistani lawmaker’s visit to India is part of the Imran Khan government’s backdoor contacts with New Delhi.

Nice meeting with @SushmaSwaraj . Peace is in best interest of people of both countries, Pakistan & India. pic.twitter.com/16dqr8cna1

“I have communicated a positive note to the Indian leaders and I hope there will now be a change in their behaviour,” Vankwani told the The Express Tribune over telephone.

The Sindh-based PTI leader, who is a lawmaker on minority seat, is on a religious trip to India amid the heightened tensions between the two neighbours after the February 14 suicide attack that killed at least 40 paramilitary forces in Pulwama in Jammu and Kashmir.

“I told the Indian foreign minister that in Pakistan it is captain’s [Prime Minister Imran Khan] government now. He is a Pathan and he does what he says. We assure you that no Pakistani institution is involved in Pulwama attack. If India provides evidence, we will facilitate the investigation,” Vankwani said.

According to the the parliamentarian, he told Swaraj that the two countries need to take lessons from the past and not to hold on to it. “Enmity can be brought to an end by befriending the enemy,” he said.