‘It is the nexus between the administration, state, and the home affairs which are responsible for the delay in the citizenship of the Pakistani Hindu migrants,’ says Hindu Singh Sodha 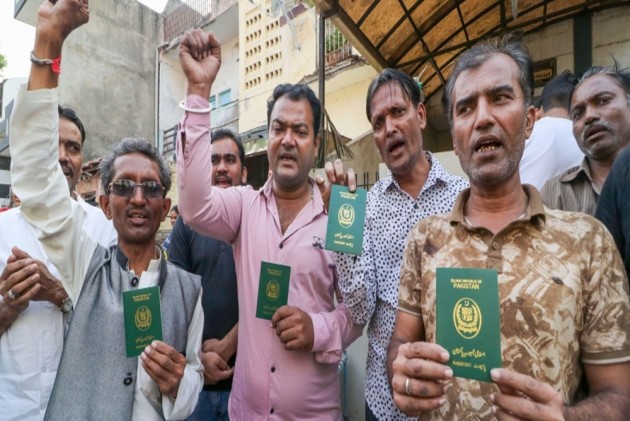 Reacting to the Union Ministry of Home Affairs's (MHA) Gazette notification under the 2009 rules of the Citizenship Act, 1955, Citizenship Amendment Act (CAA) enacted in 2019 for non-Muslims, the Pakistani Hindu Migrants living in Rajasthan have shown a mixed reaction.

While the organisations working for the rehabilitation of the Pakistani Hindu Migrants in Rajasthan have hailed the union government's move of issuing a notification under the 2009 rules of the Citizenship Act, 1955 asking non-Muslims belonging to Afghanistan, Bangladesh, and Pakistan and residing in 13 districts of Gujarat, Rajasthan, Chhattisgarh, Haryana, and Punjab to apply for Indian citizenship. At the same time, the organisations have also raised concern for its implementation and transparency in the process of giving citizenship.

Apart from the existing three districts (Jodhpur, Jaisalmer, and Jaipur), who received the citizenship power in 2016, now the collectors of the new five districts of the desert state of Rajasthan have been given powers of citizenship. These five new districts include Jalore, Pali, Sirohi, Barmer, and Udaipur.

"We welcome the government of India's decision to delegate the powers of citizenship in the 13 more districts of the five states. Long back in 2014 when the government of India, particularly, the ministry of a home constituted a task force and I suggested that whichever state this power is delegated, all the collectors of that state should be given this power instead of giving it to selected district collectors only"Hindu Singh Sodha, president of the Seemant Lok Sangathan, which works for the welfare of the Pakistani Hindu Migrants told Outlook.

Raising concern over the implementation part of the latest notification, Sodha added, "No doubt that has included a few more districts, but the main thing is the implementation part. For implementation, it needs a very vibrant and transparent regime and they have to make bureaucracy accountable so that they can deliver this citizenship within the minimum required period and for that, they not only monitor but they have to atop the bureaucratic bungling and regime friendly for the migrants".

While comparing the present citizenship process and the previous one, Sodha insists that citizenship should be given in the camp mode. "Giving citizenship is the time-bound thing, the one who completes seven years here is eligible for it. Despite giving powers to the collectors in 2016 only 25 per cent have been given citizenship in the last five years. However when compared to 2004 when the power of citizenship was delegated to the two states Rajasthan and Gujarat, around 20, 000 Pakistani refugees got citizenship, which include 13, 000 from Rajasthan and 7,000 from Gujarat", says Sodha, who has been at the forefront of the migrant rights in Rajasthan.

According to the data maintained by the Seemant Lok Sangathan, around 10,000 Pakistani Hindu migrants living in the Rajasthan are yet to receive citizenship. Whereas around 3,000-4,000 refugees are yet to get registered.

Around 10k Pak migrants yet to get citizenship

One such case is of 50-year-old Karamshi Koli, who arrived in India in 2015 along with his family of eight members. Karamashi, his family, and his son Kanumal's family are yet to get registered. "We arrived in Jodhpur in 2015 after we were persecuted in the Punjab province of Pakistan. It has been six years and our family is still struggling to get a basic registration done at the FRRO office in Jodhpur. We are here on a pilgrimage visa for Haridwar but instead of Haridwar where we knew one, we chose to stay in Jodhpur. As per the rules, the collector and Foreigners Regional Registration Office (FRRO) of the district where we are presently living have to register us. But nothing has happened so far. We are deprived of basic amenities", says Karamashi, who works as a labourer and presently lives in the settlement at Ramdev Nagar in Jodhpur.

In 2016, Jodhpur was among the 16 districts in the country whose collectors were empowered by the Centre to grant Indian citizenship to legal migrants from Pakistan, Afghanistan, and Bangladesh belonging to Hindu, Sikh, Buddhist, Jain, Parsi, and Christian communities (the same group that CAA covers as well). Union Home Ministry data shows that since then, most citizenships in Rajasthan have been granted in Jodhpur (followed by Jaipur and Jaisalmer).

The Citizenship (Amendment) Act, speeding up the process of citizenship for migrants like them, had sent a wave of cheer to many but there are still many families who are yet to receive it despite living here for two decades.

Nexus between admin, state, and MHA responsible for the delay

Waiting for the Indian citizenship 82-year-old Jogdas, who had arrived in India with his nine family members in August 2000 from the Rahmiyar khan district of Pakistan passed away in April 2021. Now his family of 20 members are left in limbo after their head of the family expired without receiving citizenship.

"Our father died waiting for Indian citizenship even after living for two decades in Rajasthan. When we arrived there we were a family of nine, including my two brothers their wives, and one kid. Today we are a family of 19 members. After his death we have no India will we ever get citizenship or not. We have been regularly going to all the camps but every time our citizenship is rejected. Unfortunately, now visas have got expired and passports also", said 50- year -old Harji Ram son of Jogadas. Harji who is a labourer has a family of six members. His two brothers Narsi Ram (42) and Juma Ram (33) have seven family members respectively. All three brothers are presently living in the Bhil Basti Kariberi settlement in rural Jodhpur. Their children study at the NGO in the camp. The nearest government school is 1.5 km away; the nearest health centre around four kilometres.

According to the sources, some Pakistani refugees even went back to Pakistan after they failed to get citizenship in India. Explaining the delay in the citizenship of the Hindu refugees, Hindu Singh Sodha told Outlook, "It is the nexus between the administration, state and the home affairs which are responsible for the delay". Under citizenship rules, a district collector forwards the application to the state government within 60 days and the latter is required to forward the application to the Home Ministry within 30 days.

Over the years, both BJP and Congress state governments have vowed to take care of Pakistani Hindu migrants. In 2019 Rajasthan Chief Minister Ashok Gehlot has said his Congress government will not implement the Act had also made it clear that the persecuted refugees should be granted citizenship irrespective of religion.

On May 28, the Union home ministry issued the notification for immediate implementation of the order under the Citizenship Act 1955 and Rules framed under the law in 2009.

This benefit is extended to minorities from Afghanistan, Pakistan and Bangladesh who fulfill all conditions applicable to any foreign citizen seeking citizenship by naturalisation after a minimum of 11 years of residency in India. Under the CAA, the period for this category was cut to five years.