Replying on the bill, Environment Minister Bhupender Yadav said,'We will be accountable to Parliament through this bill (on the issue of air pollution). It is the responsibility of central government to deal with air pollution.' 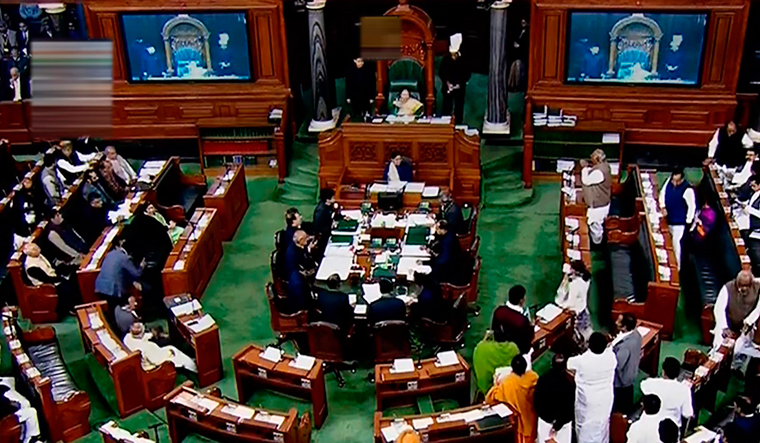 Parliament on Thursday passed a bill seeking permission to set up a commission for air quality management in the National Capital Region and its adjoining areas.

Rajya Sabha passed The Commission for Air Quality Management in National Capital Region and Adjoining Areas Bill, 2021, with a voice of vote amid chaos as opposition parties continued their protest against the Pegasus snooping matter, farm laws among several others.

The bill was passed by Lok Sabha on Wednesday.

Replying on the bill, Environment Minister Bhupender Yadav said,"We will be accountable to Parliament through this bill (on the issue of air pollution). It is the responsibility of central government to deal with air pollution."

"We have made efforts to decriminalise Section 14 (which provides penalty for causing pollution) and it shall not apply to farmers burning stubble," he said while addressing members concerned.

On the protests by members of the opposition, Yadav said,"The bill was on air pollution, but there was noise pollution in the House."

The House also negated a resolution: "That this House disapproves the Commission for Air Quality Management in National Capital Region and Adjoining Areas Ordinance, 2021 (No.4 of 2021) promulgated by the President of India on 13th April, 2021."

Following passage in Rajya Sabha, the bill will replace the ordinance.

The bill was moved for consideration and passage in Rajya Sabha by Yadav amid protests by opposition members over the Pegasus and farm law issues.

The Statement of Objects and Reasons of the bill, piloted by Yadav, states that it was noticed there is lack of a permanent, dedicated and participative mechanism adopting a collaborative and participatory approach involving relevant central ministries, state governments, local bodies and other stakeholders to tackle air pollution in the National Capital Region (NCR) and adjoining areas.

"It is observed that sources of air pollution, particularly in the National Capital Region, consist of a variety of factors which are beyond the local limits of the National Capital Region. Special focus is required on all sources of air pollution which are associated with different economic sectors, including power, agriculture, transport, industry, residential and construction," it read.

Since air pollution is not a localised phenomenon, the effect is felt in areas even far away from the source, creating the need for regional-level initiatives through inter-state and inter-city coordination in addition to multi-sectorial synchronisation, the statement of objects said.

For a permanent solution and to establish a self-regulated, democratically-monitored mechanism for tackling air pollution in NCR, it was deemed necessary to take up immediate legislative measures to set up a commission for air quality management in NCR and adjoining areas, it noted.

This will replace old panels to streamline public participation, inter-state cooperation, expert involvement and persistent research and innovation, the statement of objects noted.

As Parliament was not in session and there was an immediate need for legislation in this regard, the Commission for Air Quality Management in National Capital Region and Adjoining Areas Ordinance, 2020, was promulgated on October 28, 2020.

But a bill to replace the ordinance could not be introduced in Parliament.

Consequently, the ordinance lapsed on March 12, 2021. Thereafter, the Commission for Air Quality Management in National Capital Region and Adjoining Areas Ordinance, 2021 was promulgated on April 13, 2021.

Earlier, the House also passed a motion to concur Lok Sabha recommendation to appoint four members to the Joint Committee on the Personal Data Protection Bill, 2019.