Parliament Monsoon Session: Both Houses Adjourned Till 11 am Tomorrow

As the disruptions continued despite repeated pleas by the Chair to maintain decorum, both Lok Sabha and Rajya Sabha were adjourned till 11 am tomorrow. 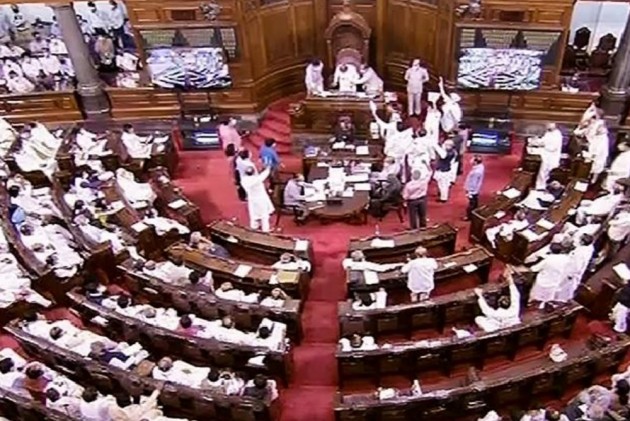 The monsoon session of Parliament began on a stormy note with the Opposition creating an uproar and preventing Prime Minister Narendra Modi from introducing his newly-inducted Union ministers to the House.

As the disruptions continued despite repeated pleas by the Chair to maintain decorum, both Lok Sabha and Rajya Sabha were adjourned till 11 am tomorrow.

On Sunday, a series of meetings were held ahead of the session, indicating the seriousness with which, both the government and Opposition parties will approach the session. The Opposition had said future outbreaks of Covid-19 will be discussed, along with gaps in government strategy that led to the second wave. Loss of livelihood, businesses closing down, and the steps the government has taken to prevent this in the form of various measures, will also be flagged.

However, as soon as the House reassembled at 3:00 pm, Opposition members entered the Well of the House and started raising slogans against the government.

Deputy Rajya Sabha Chairman Harivansh, however, tried to conduct the business amid the din.

Leader of Opposition Mallikarjun Kharge wanted to initiate a discussion under Rule 267 (suspension of rules) but was not allowed by the deputy chairman.

Harivansh noted that the matter cannot be revisited as Chairman M Venkaiah Naidu had already given his decision on it which cannot be reviewed.

Amid the din, Union Minister of Ports, Shipping and Waterways Sarbananda Sonowal introduced the The Marine Aids to Navigation Bill, 2021. The Bill seeks to replace an over-nine-decade-old law governing lighthouses.

As the Opposition parties continued with the sloganeering, the deputy chair adjourned the House for the day.

The Marine Aids to Navigation Bill, 2021 seeks to provide for a fresh framework to establish and manage vessel traffic services besides use of the term “marine aids to navigation” instead of “lighthouse” to enable further use of modern forms of aids to navigation.

The House witnessed three adjournments before the deputy chair adjourned it for the day.

In the morning, when the House assembled on day one of the Monsoon Session, the proceedings were adjourned for an hour as a mark of respect to departed sitting MPs Raghunath Mohapatra and Rajeev Satav.

No sooner did the House reassembled around 12.25 pm, opposition members started raising slogans as Chairman M Venkaiah Naidu was making his opening remarks about the expectations from the current session amid the Covid pandemic.

Amidst the sloganeering, the chairman asked Prime Minister Narendra Modi to introduce the newly-inducted ministers to the House.

However, the protesting members kept raising slogans and the prime minister could not introduce the ministers. Several opposition members trooped into the well of the House.

Chairman Naidu had to adjourn the proceedings till 2 pm.

As soon as the House reassembled at 2:00 pm, there were again uproarious scenes, and the House was adjourned till 3:00 pm by Deputy Chairmen Harivansh.

Expressing anguish over the conduct of the protesting opposition members, Modi questioned their “mentality” behind not allowing him to introduce women, Dalit and scheduled tribe MPs who have been made ministers.

Modi said that when the new Union ministers belonging to rural background and the children of the farming community were being introduced to the House, some opposition party members were not happy.

He said a large number of MPs including women, Dalit and those belonging to scheduled tribes have been made Union ministers, but some opposition members do not want to hear their names and give them the due honour.

"What is this mentality?” he wondered.

The prime minister further said it was for the first time that the House was witnessing "such a mentality".

As the opposition members continued their uproar, Modi laid the list of newly-inducted ministers on the table of the House.

Meanwhile, the Chairman did not allow the 17 notices by different opposition parties to suspend the scheduled business of the House and take up the matters raised by them.

He said it was not feasible to take 17 issues in one go, and assured the members that all the important matters would be taken up in due course of time.

But the assurance did not pacify the opposition members, forcing Naidu to adjourn the House till 2 pm.

The new Leader of the House and Union minister Piyush Goyal said it was a tradition since the times of first prime minister Jawaharlal Nehru that new ministers are introduced to the House.

Goyal condemned the "behaviour" of the opposition members and said such a conduct would be harmful for the democratic traditions of the country.