The Farm Laws Repeal Bill 2021 will be introduced on the first day of the Parliament Winter Session on Monday. PM Narendra Modi had announced that the contentious farm laws will be repealed. 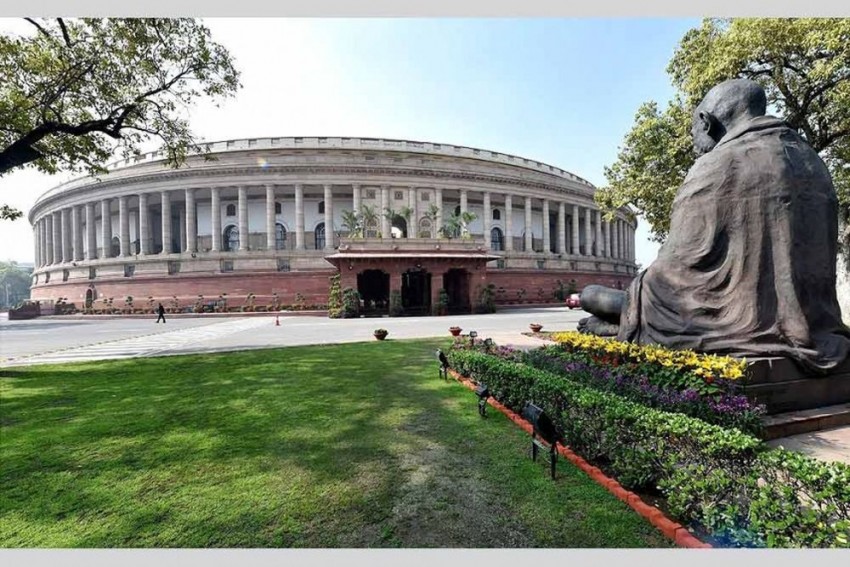 The government is scheduled to bring in new bill to repeal three contentious farm laws on the first day of the winter session of the Parliament on Monday.

The bill slated to be brought inside Parliament states "only a small group of farmers are protesting" against these legislations, the need of the hour is to take along everyone for inclusive growth.

The Farm Laws Repeal Bill, 2021 has been listed for introduction and passage in Lok Sabha on the first day of the Winter Session of Parliament.

The ruling BJP and main opposition party Congress have issued whips to their MPs to be present on the day.

Union Agriculture Minister Narendra Singh Tomar will introduce the bill in the house, which was approved by the Union Cabinet on Wednesday.

In a special address to the nation, Prime Minister Narendra Modi on November 19 announced that all three farm laws, which were passed by Parliament in September last year, will be repealed in the Winter Session and had said these laws were brought for the welfare of farmers, especially small farmers, but his government could not explain the benefits to some farmers despite its efforts.

The Supreme Court had stayed the implementation of the three laws in January.

Senior Congress leader Manish Tewari, however, criticised the wording of 'Objects and Reasons' of the repeal bill, alleging that the government is demeaning the sacrifice of around 700 farmers who died during the protest.

"Why rub it in especially when @PMOIndia has apologised to farmers. In the statement of Objects & Reasons of The Farm Laws Repeal Bill-2021 why write 'Even though a Small Group of Farmers are Protesting against these Laws' demeans sacrifice of 700 odd farmers who died struggling," Tewari tweeted.

Meanwhile, the Samyukt Kisan Morcha has suspended its November 29 tractor march to Parliament and will hold a meeting next month to decide its future course of action.

With farmers continuing their protests at Delhi borders, Tomar, in an official statement, appealed to them to end their agitations as the government has agreed to their initial demand of repeal of the three laws.

He said the Centre has also agreed to their demand of decriminalising stubble burning.

According to Lok Sabha's list of business for November 29, "Union Agriculture Minister Narendra Singh Tomar will move for leave to introduce a Bill to repeal the Farmers (Empowerment and Protection) Agreement on Price Assurance and Farm Services Act, 2020, the Farmers’ Produce Trade and Commerce (Promotion and Facilitation Act) Act, 2020, the Essential Commodities (Amendment) Act, 2020 and to amend the Essential Commodities Act, 1955. Also to introduce the bill".

In the statement of 'Objects and Reasons' of the bill, the government has highlighted the steps taken by it in recent years for the welfare of farmers, particularly small and marginal farmers.

"To enable the farmers to sell their produce at higher prices and benefit from technological improvements, farmers have been provided access to agriculture markets which will help them increase their income. With this objective three farm laws...were enacted, as a part of the government's endeavour to improve the condition of farmers including small and marginal farmers," the copy of the bill said.

Without taking away the existing mechanisms available to farmers, new avenues were provided for trade of their produce. Besides, farmers were free to select the avenues of their choice where they could get more prices for their produce without any compulsion.

"Even though only a group of farmers are protesting against these laws, the government has tried hard to sensitise the farmers on the importance of the farm laws and explain the merits through several meetings and other forums," the bill said.

"During the COVID-19 period, the farmers have worked hard to increase production and fulfil the needs of the nation. As we celebrate the 75th year of Independence-'Azadi Ka Amrit Mahotsav', the need of the hour is to take everyone together on the path of inclusive growth and development," it added.

The bill mentioned that the three laws provided the freedom to farmers to sell their produce to any buyer at any place of their choice to realise remunerative prices.

Besides, the laws created an ecosystem wherein processor, bulk buyers, organised retailers and exporters and the like can directly engage with farmers; created a facilitative framework for electronic trading to improve transparency and price discovery; and provided a legal framework for farming contracts to protect the interest of farmers, economically empower them and assure the price for their produce in advance, according to the bill.

These enactments were made for the overall socio-economic development of farmers and the rural sector, it added.

The government has been making several interventions to support farmers, including small and marginal farmers by providing quality seeds, credit, insurance, procurement and market support, among others, the copy of the bill said.

The budget allocation for the Department of Agriculture has been increased by more than five times since 2014, it added.

Thousands of farmers, especially from Punjab, Haryana and parts of Uttar Pradesh, have been protesting against the three farm laws at Delhi borders for the last one year.

Although farmer unions have welcomed the government's recent move to repeal the three farm laws, they said their protest would continue until the laws are totally and formally withdrawn and other demands, including a legal guarantee to Minimum Support Price for crops, are met. (With PTI inputs)