Supriya Sule, Sharad Pawar's only daughter, was first elected to the Rajya Sabha and then in the Lok Sabha from Baramati, the family stronghold. Sources said now there was no one to challenge Supriya Sule in the party and she will be catapulted to the top position. 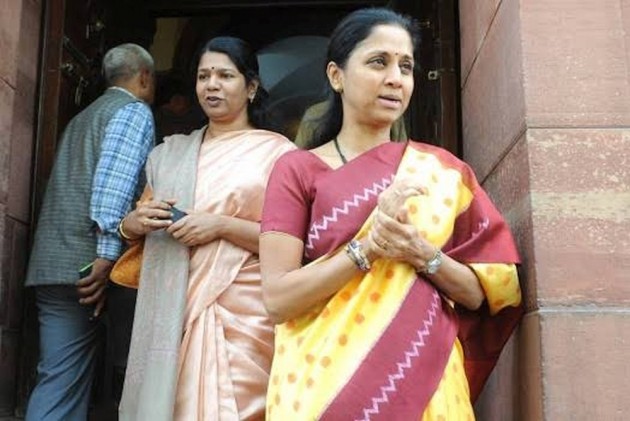 After the sudden developments in Maharashtra, Supriya Sule changed her WhatsApp status and wrote "Party and Family splits".

This was not a situation the Pawars may have wanted, but it could be a blessing in disguise for Sharad Pawar said sources, as Sharad Pawar will be able to settle his daughter Supriya Sule as the undisputed leader of the Nationalist Congress Party (NCP).

It was Ajit Pawar who had restricted Supriya Sule's operation to Delhi only, but of late Sule was trying to take control of the party in the state.

Supriya Sule, Sharad Pawar's only daughter, was first elected to the Rajya Sabha and then in the Lok Sabha from Baramati, the family stronghold. Sources said now there was no one to challenge Supriya Sule in the party and she will be catapulted to the top position.

Ajit Pawar's rebellion could prove to be a boon for Sule, as Ajit Pawar took advantage of his being the elected leader of the Legislative party. In the late night development the junior Pawar ditched his uncle and mentor and formed the government with the BJP and became the deputy Chief Minister.

Sources told IANS that Ajit Pawar was in talks with the BJP through party MP Sunil Tatkare, and Ajit Pawar had the support of around half the MLAs of the NCP.

Sharad Pawar was said to be apprehensive about his nephew, so to prevent party from splitting, he had started parallel negotiation with the Shiv Sena to form government and kept both Ajit Pawar and Sunil Tatkare part of the negotiating team in Delhi and Mumbai.

Sunil Tatkare was the key pointsman between the BJP and NCP leader. Before the election in the state, Ajit Pawar had resigned as MLA and it was only after much persuasion by Sharad Pawar that he was pacified, but the turf war between Supriya Sule and Ajit Pawar continued.

During the UPA rule, it was decided in the family that Supriya Sule will do politics at the central level and Ajit Pawar will manage affairs of the state.