The PDP said it is the administration's ‘failure’ for ‘not being able to protect the people’, for the ‘worsening situation’ and for ‘working against the people’. 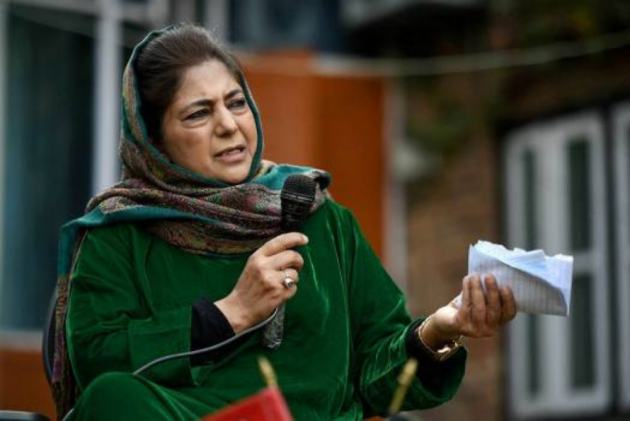 Accusing administration of failing to provide a sense of security to the people, PDP Friday demanded resignation of Jammu and Kashmir Lieutenant Governor Manoj Sinha over the recent civilian killing spree by suspected militants in the Union Territory.

The party’s chief spokesperson Suhail Bukhari said the situation in the UT is “alarming” and the civilian killings have exposed the "false" narrative of normalcy in J&K.

The UT has witnessed a spurt in civilian killings in the last few days. The latest civilian killing that took place was of principal Supinder Kaur and teacher Deepak Chand, who were shot dead at point blank range inside a government school in the Srinagar city.

On Tuesday, Makhan Lal Bindroo, a prominent Kashmiri Pandit, and a vendor, Virendra Paswan from Bihar, were killed by terrorists in Srinagar, and civilian, Mohammad Shafi Lone, in Bandipora. Terrorists shot dead Majid Ahmad Gojri in Srinagar and Mohammad Shafi Dar at Batamaloo on Saturday.

"One thing is clear from the incidents that have taken place in the last few days that the situation is getting worse. The people of Jammu and Kashmir, especially in the Valley, do not feel safe," Bukhari said.

"We have condemned these incidents in the strongest terms, they are anti-humanity and anti-Kashmiriyat," he said.

Bukhari also said that the overall situation in Kashmir is "alarming" and the government of the day is responsible for it.

"So, for its (administration's) failures, for not being able to protect the people, for the worsening situation and for working against the people, the PDP demands that Lieutenant Governor Manoj Sinha has no moral authority left to continue and he should resign. He has failed in his work to provide security and development,” he said.

The PDP chief spokesperson said the situation demands that questions be asked to the government.

“It is now two years since the unconstitutional and illegal decision to revoke Jammu and Kashmir’s special status and the Union Territory is under the direct control of the Union home ministry. The situation today tells you about their performance in these two years,” Bukhari said.

In 2019, the Centre had revoked the special status of the erstwhile state of Jammu and Kashmir and divided it into union territories of Jammu and Kahsmir and Ladakh.

“Question arises that who will take the responsibility for the bloodshed that is taking place on the roads and lanes of Kashmir. Who is answerable for this? What are the security apparatus and the intelligence agencies doing? What is the government of the day doing? The responsibility clearly lies on the government of the day and so the need is to make them answerable,” he said.

Claiming that the situation a few years back was not how it is today, Bukhari said since the government's control has been from Delhi, the situation has been “worsening”.

“There is no sense of security, be it among the minority community or the majority community. They used to say Article 370 was the biggest hurdle in achieving peace here and so it had to be removed. They used to say that the political parties here were a hurdle and they were sidelined. They should be asked today then who is responsible for the situation getting worse,” he added.

The PDP leader said such incidents have “exposed the false narrative” about normalcy in Jammu and Kashmir or the end of militancy or that everything is under control. The narrative was created and the whole country was lied to by the governments here and in Delhi, The PDP leader said.

Appealing to the people to be united and fight the situation together, Bukhari said these incidents were being done to target the communal harmony and brotherhood in Kashmir.

Later, PDP workers staged a protest from the party headquarters near Sher-e-Kashmir Park and tried to match towards the city centre Lal Chowk here.

However, police scuttled their move and did not allow them to proceed towards Lal Chowk. (With PTI inputs)