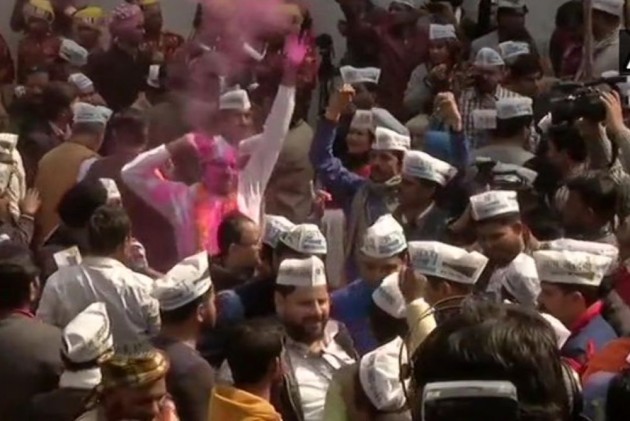 As the afternoon trends showed Arvind Kejriwal-led Aam Admi Party in a commanding position, political parties and leaders started reacting to the Delhi Assembly election results with many calling it a defeat of BJP's belligerent campaign.

"I have congratulated Arvind Kejriwal. People have rejected BJP. Only development will work, CAA, NRC and NPR will be rejected," Mamata Banerjee said.

Senior RJD leader Manoj Jha said the biggest message from the Delhi Assembly polls was for the BJP that "poisonous" campaign and statements will not work.

He said the message has also gone out to Bihar where assembly polls are due next year, and to the rest of the country.

The Rashtriya Janata Dal (RJD) had contested the Delhi election on four seats in alliance with the Congress. The alliance was staring at a massive defeat in the national capital.

"We are not at all disappointed, people have given their mandate (for AAP). The biggest message is for the BJP that poisonous campaign and statements will not work," Jha told reporters.

Cricketer-turned-politician Gautam Gambhir, too, congratulated Kejriwal and said the saffron party tried its best but failed to convince the people of the city. "I hope Delhi develops under the chief ministership of Arvind Kejriwal."

But with Congress set to draw a blank in Delhi, party leader Sharmistha Mukherjee said that "inordinate delay in decision making at the top" is among the reasons for the dismal performance.

"We are again decimated in Delhi. Enough of introspection, time for action now. Inordinate delay in decision making at the top, lack of strategy and unity at the state level, demotivated workers, no grassroots connect - all are factors. Being part of the system, I too take my share of responsibility," she tweeted.