'There is no point in trying to drag the BJP and the BJP leaders names through the mud,' Vasundhara Raje said on the ongoing Rajasthan political crisis. 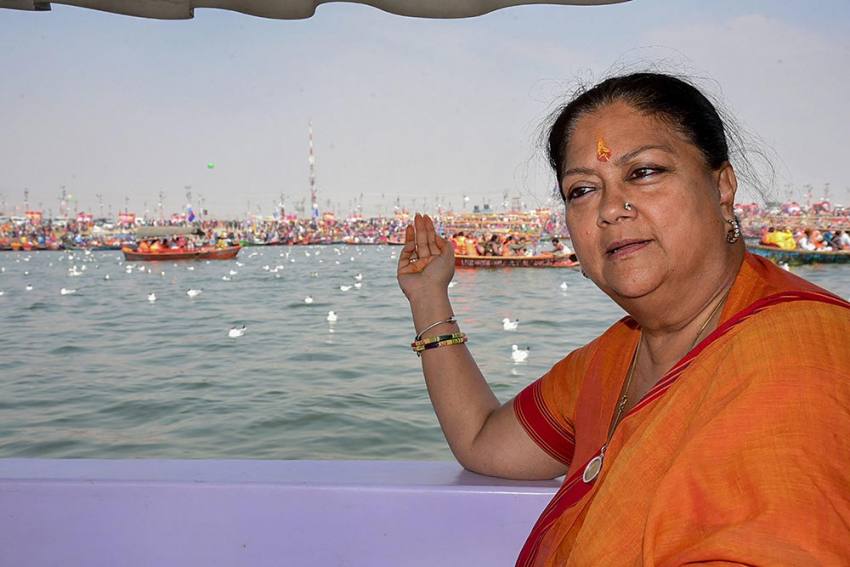 It is unfortunate that the people of Rajasthan are paying for the discord within the Congress, BJP leader and former chief minister Vasundhara Raje said on Saturday in her first reaction on the political crisis in the state.

The interest of people must be paramount for the government, Raje said while asking the ruling Congress to think about the public.

"There is no point in trying to drag the BJP and the BJP leaders names through the mud. It is the interest of our people that must remain paramount!" she said.

The Congress party, on Friday, demanded the immediate arrest of Union minister Gajendra Singh Shekhawat for being allegedly involved in a conspiracy to topple the Gehlot-led government in Rajasthan. The demand came after audio clips went viral on social media platforms. The clips are purportedly of a telephonic conversation between Shekhawat, BJP leader Sanjay Jain and rebel Congress MLA Bhanwarlal Sharma.

The audio clips had come into circulation on the same day that sacked deputy chief minister Sachin Pilot and his loyalist MLAs, who are caught in a power tussle with chief minister Ashok Gehlot, moved the Rajasthan High Court challenging the anti-defection law.

Raje's tweet is her first reaction on the political crisis in Rajasthan. Sources in BJP told Outlook the 67-year-old BJP leader is upset with the alleged proximity of Pilot with the BJP.

"Raje is eyeing the third term as chief minister of Rajasthan. Already, attempts were made to sideline her after BJP lost in assembly polls in 2018 in the state. The latest political crisis has made her more upset as she can see a potential replacement of her in Pilot if he joins the party. But even now she has the support of at least 30 MLAs who will stand with her," a senior BJP leader told Outlook on the condition of anonymity.