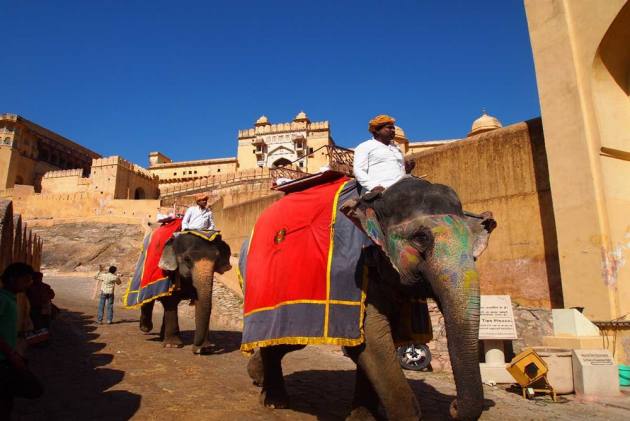 What comes to your mind when we say, Amer Fort? Elephant safari? We know that a trip to Amer Fort is incomplete without those iconic elephant safaris. However, in 2018, the Animal Welfare Board of India had found that 1 out of 100 jumbos were suffering from Tuberculosis.

To solve this problem and to save elephants, People for the Ethical Treatment of Animals (PETA) India has come up with a proposal.

The animal rights group has decided to design a chariot that can be used for rides at the fort, instead of elephants, TOI reported.

According to PETA, the chariot was designed in association with leading design company Desmania Design following the recommendation of the committee constituted by the Project Elephant Division of the Ministry of Environment, Forest and Climate Change to phase out elephant rides at Amer Fort.

PETA said the electric vehicle, suggested to be named “Maharaja”, resembles a royal chariot. The vehicle could ferry four tourists per trip and would be suitable for hilly terrain like that at Amer Fort.

How TB infected and blind elephants used for rides at Amer fort can be a risk for humans too.#NotOursToAbuse #SentientBeings #PETAIndia pic.twitter.com/jYgDKzCwlM

The organisation representatives also submitted a factsheet to the Chief Secretary citing shocking instances in which captive elephants have reacted to their abuse at Amer Fort, leading to serious injuries, deaths, and destruction of property, and requested him to safeguard tourists and the general public from such health and safety risks.

"The respected chief secretary listened to PETA India, which represents kind people around the world, and now we hope tourists and elephants will be given the royal treatment with these majestic, cutting-edge cars, which can replace animals forced to give rides," says PETA India Chief Advocacy Officer Khushboo Gupta.

Last year, it was reported that four elephants had died there in six months due to health issues.

All of the four dead elephants had been diagnosed with TB but continued to be used for safaris.