The Fortis Hospital in Shalimar Bagh, presently running on its backup oxygen supply, urged the prime minister, Delhi chief minister and other ministers for 'immediate assistance'. 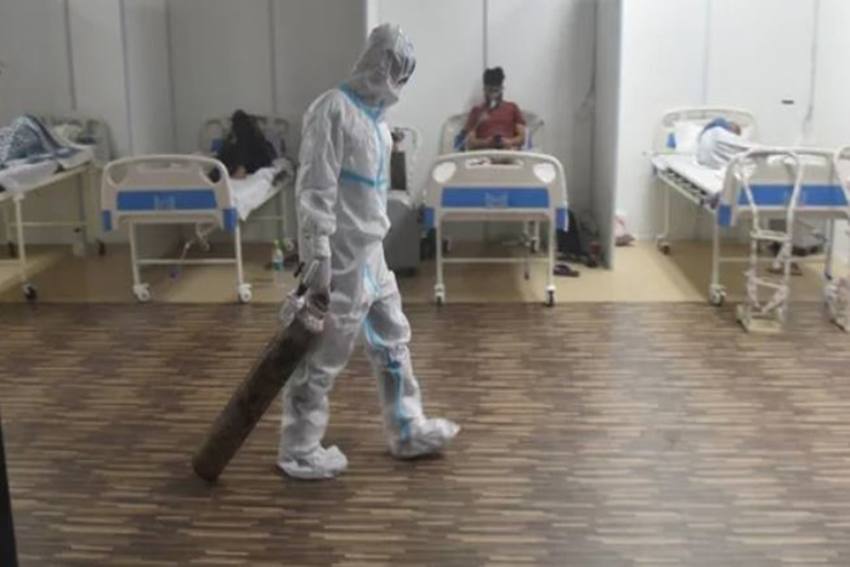 Amid an alarming crisis over oxygen supply as the second coronavirus wave ravages the country, some "helpless" hospitals in Delhi are advising relatives to shift their patients to another facility, while several others have been left with no option but to use their backup stock.

Narin Sehgal, the director of a hospital in Delhi, really doesn't know how to help his patients in a situation like this.

While requesting for oxygen supply, Narin Sehgal, director Sehgal Neo Hospital, Meera Bagh, said the facility had 120 Covid-19 patients out of the total 150 and oxygen was left for another two hours only.

"Sixty COVID patients in my hospital are in dire need of oxygen," Sehgal said through a video message.

"I really don't know how to help my patients in a situation like this," Sehgal said. "I've been asking for help from everyone, but nothing is coming through. Please help me!"

The Fortis Hospital in Shalimar Bagh, presently running on its backup oxygen supply, urged the prime minister, Delhi chief minister and other ministers for "immediate assistance".

The Saroj Super Speciality Hospital, having not received oxygen refill for the past 44 hours, is now advising its patients to shift to other hospitals.

"We're running low on oxygen and using our backup now. We have alerted our patients about the situation and are advising them to shift to another hospital. Things are really uncertain," Saroj Super Speciality Hospital medical director P K Bhardwaj told PTI.

Bhardwaj said the hospital, which needs three metric tonnes of oxygen per day on an average, was only getting around an MT of oxygen for the past few days. Seventy patients at the hospital are currently on oxygen support.

Sailing in the same boat is the Batra Hospital in Tughlakabad Institutional area.

"We've run out of oxygen completely, even the backup," Batra Hospital executive director Sudhanshu Bankata told PTI. "We feel helpless; have started asking families to take patients to other healthcare facilities where oxygen is available."

Bankata had warned the authorities of such a situation earlier in the day when the hospital received an emergency oxygen supply moments around 9 am. He had said the stock would "last another one-and-a-half hours" only.

There are around 350 patients admitted at the hospital, out of which 265 are coronavirus positive and 30 are in the ICU.

Twenty critical patients died overnight at Jaipur Golden Hospital in Delhi amid a serious oxygen crisis. The hospital, which has over 200 patients, had only half an hour of oxygen left at 10.45 am.

The situation is equally worrisome at the Fortis Hospital, which is running on its backup oxygen supply, desperately waiting for the refill since morning.

"Fortis Shalimar Bagh is running out of oxygen. Patients' lives are at risk," it tweeted, issuing an SOS.

"We are running on backup, waiting for supplies since morning. We are currently suspending admissions. Request immediate assistance @PMOIndia @ArvindKejriwal @AmitShah @PiyushGoyal @rajnathsingh," the hospital added.

The hospital said it was keeping the patients and attendants informed about the "critical situation", and trying to manage admitted patients to the best of their abilities.

Elite hospitals like the Sir Ganga Ram, which got a refill of 1.5 tonnes of oxygen, said their present stock would last for two hours only. The hospital requires a minimum of 11,000 cubic metres of oxygen daily.

"We were running oxygen at half the normal pressure. This supply of 1.5 tonnes of oxygen will last for may be two hours. The situation is scary," an official said.

The facility had on Friday reported the death of 25 critical patients as the administration grappled with depleting oxygen supplies.

"I appeal to both the Centre and the state to help. On one hand, they increased COVID beds and on the other, they can't supply oxygen in sufficient quantity. How are we supposed to work?" Rana asked.