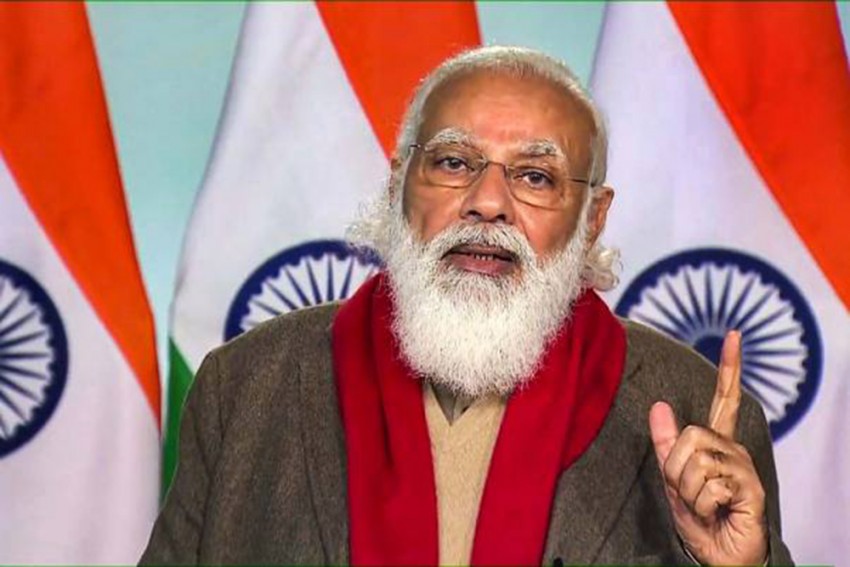 Guru Rabindranath Tagore had not envisioned the university as a typical educational institution, expressed Modi, but one that will help Indian culture realise its full potential globally.

Addressing online the convocation of Visva Bharati University that was launched by Nobel laureate Tagore in 1921 and designated the first central university in 1951, Modi said knowledge was not a "still and static but a dynamic concept".

He asked the institution's students to prepare a 25-point vision document for the next 25 years that will lead all education establishments in the country to emulate it and enhance India's image globally.

"A starting point could be that the students under the mentorship of teachers of this inspirational institution begin helping farmers, artisans living in villages nearby to find global markets for their products. That will be a step towards building an 'Atmanirbhar' (self-reliant) Bharat," he said.

He said West Bengal can become an example of how unity can boost national growth and progress.

"Bengal is an inspiration for Ek Bharat-Shreshth Bharat campaign. Visva Bharati will play a big role in the 21st-century knowledge economy, taking Indian knowledge and identity to every corner of the world. Students should prepare a vision document for the next 25 years about the 25 biggest goals of Visva Bharati in 2047," he said.

He told the gathering that with knowledge comes responsibility and the knowledge attained by the students was not theirs alone but a legacy for future generations.

"Your knowledge is not only yours but society's... it is the heritage of the country. Your knowledge and skill can make a nation proud or push society into the darkness of slander and ruin," he said.

Modi said some highly educated and skilled people were spreading terror and violence in the world, while others were toiling day and night to free people from a global epidemic like COVID-19.

"It is not about ideology but the mindset, whether it is positive or negative," he said.

Modi said it was for the students to decide whether they wanted to be part of the problem or solution, and asked them not to be afraid of taking risks.

"If your intentions are clear and your loyalty is to 'Ma Bharati' (Mother India) every decision of yours will take you towards finding a solution. It's for you to decide whether you want to be a part of the problem or solution.

"You may not get the results you thought you will after you had taken a decision, but you should not be afraid of making a decision," he said.

The prime minister said the new National Education Policy (NEP) was a major step towards building a self-reliant India as it gave impetus to research and innovation.

He said the NEP broke the old restrictions and allowed students to realise their potential, promoted entrepreneurship and self-employment, research and innovation.

"This new national education policy is a major milestone in the making of an Aatmnirbhar Bharat," he said.

In his speech peppered with references to Tagore, a native of Bengal but idolised by all Indians, Modi said, "Gurudev believed that we have to discover ourselves among the varied Ideologies and differences."