Bhutanese Prime Minister Lotay Tshering received Modi at the airport. Modi was given a red-carpet welcome after his arrival here. 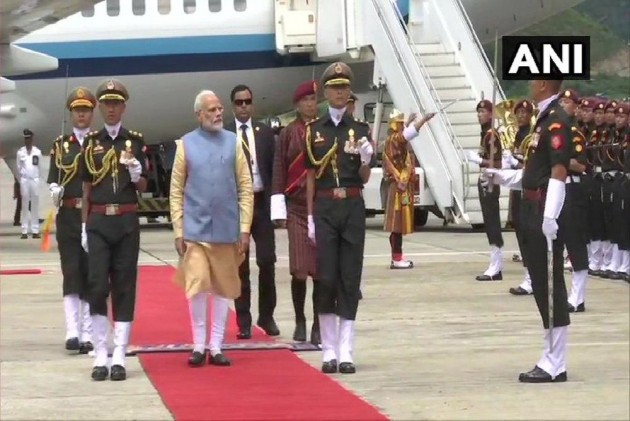 Prime Minister Narendra Modi received a red-carpet welcome as he arrived in Bhutan on Saturday on a two-day state visit during which he will hold talks with Bhutanese leaders to further deepen the bilateral ties.

This is Modi's second visit to Bhutan and the first since his re-election.

Bhutanese Prime Minister Lotay Tshering received Modi at the airport. Modi was given a red-carpet welcome after his arrival here.

Later, the prime minister headed for the capital Thimphu.

"Waving the Indian tricolour and the Bhutanese flags, people lined up along the route from Paro to the capital city Thimphu to welcome PM," Kumar tweeted.

In his departure statement issued in New Delhi on Friday, the prime minister said his visit to the Himalayan nation in the beginning of the current term reflects the high importance his government attaches to New Delhi's relations with Bhutan-- a "trusted friend and neighbour".

He expressed confidence that his visit will promote India's "time-tested and valued friendship" with Bhutan and consolidate it further for the prosperous future and progress of the people of both the countries.

During the visit, Modi would hold talks with King Jigme Khesar Namgyel Wangchuck and his Bhutanese counterpart on the entire gamut of bilateral relations.