PM Narendra Modi, in a statement before his two-day visit to Bishkek from June 13-14, said that on the sidelines of the SCO Summit, he also plans to meet several leaders, including Russian President Vladimir Putin and Chinese President Xi Jinping. 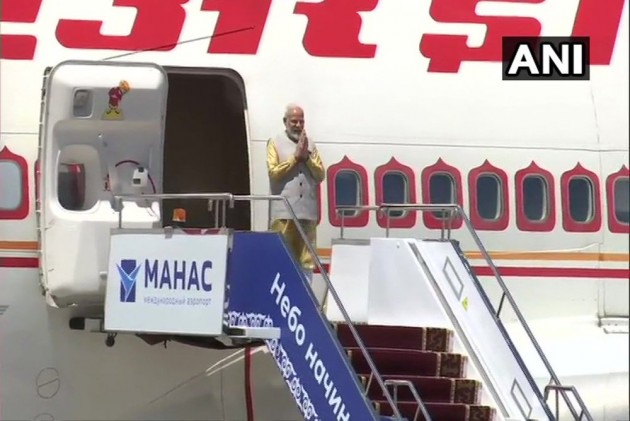 Modi, in a statement before his two-day visit to Bishkek from June 13-14, said that on the sidelines of the SCO Summit, he also plans to meet several leaders, including Russian President Vladimir Putin and Chinese President Xi Jinping.

"We attach special importance to SCO in promoting multilateral, political, security, economic and people-to-people interaction in the region. India has actively participated in various SCO dialogue mechanisms since its full membership of SCO two years ago," he said on Wednesday.

India has extended full cooperation to the chairmanship of the Kyrgyz Republic over the past year, Modi said.

"The summit is expected to discuss the global security situation, multilateral economic cooperation, people-to-people exchanges and topical issues of international and regional importance. On the sidelines of the summit, I also plan to meet several leaders bilaterally," he said.

"Strengthening India's presence on the global stage. For the 1st multilateral engagement post re-election, PM @narendramodi embarks on a two-day visit to attend Shanghai Cooperation Organisation Council of Heads of State meeting on 13-14 June 2019 in Bishkek," he said on Twitter.

"The SCO Summit will be followed by the bilateral component of the visit to Kyrgyz Republic on 14 June. PM @narendramodi will have delegation-level talks with President Jeenbekov and jointly inaugurate the India-Kyrgyz Business Forum with Kyrgyz President," Kumar said in another tweet.

The MEA last week said that no bilateral meetings had been planned between Prime Minister Modi and his Pakistani counterpart Imran Khan on the sidelines of the SCO Summit.

India and the Kyrgyz Republic, bound by historical and civilisational links, share traditionally warm and friendly relations. "In recent times, our relations have expanded in several areas of bilateral engagement, including defence, security, trade and investment," he said.

"Apart from our discussions on the entire range of bilateral cooperation, President Jeenbekov and I will jointly address the first meeting of India-Kyrgyz Business Forum.