Prime Minister Narendra Modi, who arrived in Glasgow on Sunday night, was greeted by British PM Borish Johnson ahead of the COP26 opening ceremony on Monday. 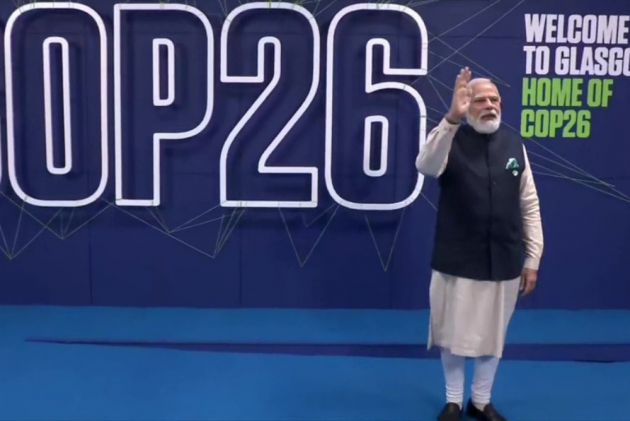 Prime Minister Narendra Modi, who arrived in Glasgow on Sunday, will be attending the Cop26 talks on Monday which will focus on climate change. The PM is expected to deliver a national statement later in the day.

The Prime Minister, who flew into Glasgow from the G20 Summit in Italy, is scheduled to begin the UK leg of his European tour with a meeting with community leaders and Indologists based in Scotland on Monday morning.

Why is PM Modi in Glasgow?

PM Modi is in Glasgow to attend the opening ceremony of the World Leaders’ Summit (WLS) at the 26th Conference of Parties (COP26) to the United Nations Framework Convention on Climate Change (UNFCCC) at the Scottish Event Campus (SEC) in Glasgow.

During the high-profile segment of the World Leaders’ Summit, PM Modi will be presenting the formal position on India's climate action agenda and lay out the best practices and achievements in the sector at the COP26 summit.

At the end of day one of the World Leaders’ Summit on Monday, Modi will join more than 120 Heads of Government and Heads of State at a special VVIP reception at Kelvingrove Art Gallery and Museum – one of Scotland’s most popular visitor attractions.

The reception will also involve members of the royal family, including Prince Charles and wife Camilla and Prince William and wife Kate Middleton. Queen Elizabeth II was due to attend this special reception but pulled out last week after medical advice against travel.

The PM's address with follow that of Poland's PM Matuesz Morawiecki, and will be followed by addresses from Australian PM Scott Morrison and Pakistan's Imran Khan.

Modi received a warm welcome by his British counterpart Boris Johnson upon his arrival at the Scottish Exhibition Centre to attend the opening ceremony of the COP26 climate summit.

Modi’s bilateral meeting with Boris Johnson is expected to take place soon after Monday’s opening ceremony, which will include cultural performances and a speech by the UK Prime Minister. Johnson has said the summit will be the "world's moment of truth" and has urged world leaders to make the most of it.

Modi, who arrived in Glasgow on Sunday night from Rome, was met by Johnson and UN Secretary-General Antonio Guterres and was then seen interacting animatedly with them. The three leaders also attended the G20 Summit in Italy which concluded on Sunday.

Landed in Glasgow. Will be joining the @COP26 Summit, where I look forward to working with other world leaders on mitigating climate change and articulating India’s efforts in this regard. pic.twitter.com/G4nVWknFg1

Together for our planet!

PM @narendramodi received by UK PM @BorisJohnson and UN Secretary General @antonioguterres as he arrives at the Scottish Exhibition Centre to attend the World Leaders Summit of @COP26. pic.twitter.com/6UW06RrYe1

He made the comparison between world leaders and James Bond, saying that the fictional secret agent often ends his films fighting to stop a force from ending the world.

"The tragedy is that this is not a movie and the doomsday device is real," he warned.

Over 130 World Leaders to 'Feel The Heat'

Modi will be joined by several other world leaders at the summit. From US President Joe Biden to Seychelles President Wavel John Charles Ramkalawan, they are expected to say how their nation will do its utmost, challenge colleagues to do more and generally turn up the rhetoric.