Considered as the longest tunnel in the world, the Atal Rohtang tunnel; is 9.02km long and connects Manali to Leh. Claiming that the government has prioritised development of border infrastructure, Prime Minister Modi said that there was ‘nothing more important to us (the government) than protecting country.’ 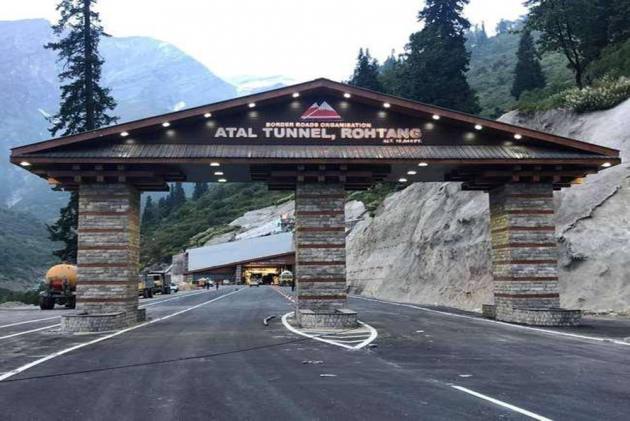 Prime Minister Narendra Modi on Saturday inaugurated the strategically important all-weather Atal Tunnel, which reduces the distance between Manali and Leh by 46 km and the travel time by four to five hours, at Rohtang in Himachal Pradesh.

Atal Tunnel, built by the Border Roads Organisation, is the longest highway tunnel in the world. The 9.02-km tunnel connects Manali to Lahaul-Spiti valley throughout the year. The valley was earlier cut off for about six months every year due to heavy snowfall.

Speaking during the inauguration, the Prime Minister said that it was a historic day and that not only Atal Bihari Vajpayee’s dream was realised today, but also the decades long wait of the people of Himachal Pradesh came to an end. “Not just Himachal Pradesh, Atal Tunnel will be a lifeline for Leh-Ladakh,” Modi added. Criticising the previous governments, Modi said that after the Vajpayee government laid the foundation for the tunnel, the consequent governments at the centre neglected the project. “Work on Atal Tunnel was accelerated after 2014; in just six years, we completed the work of 26 years,” Modi said. Claiming that the government has prioritised development of border infrastructure, the Prime Minister said that there was “nothing more important to us (the government) than protecting country.”

The Atal Bihari Vajpayee government had taken the decision to construct a strategic tunnel below the Rohtang Pass on June 3, 2000, and the foundation stone for the access road to the south portal of the tunnel was laid on May 26, 2002. The Modi government decided to name the Rohtang Tunnel as Atal Tunnel in December 2019 to honour the former prime minister who had passed away the previous year.