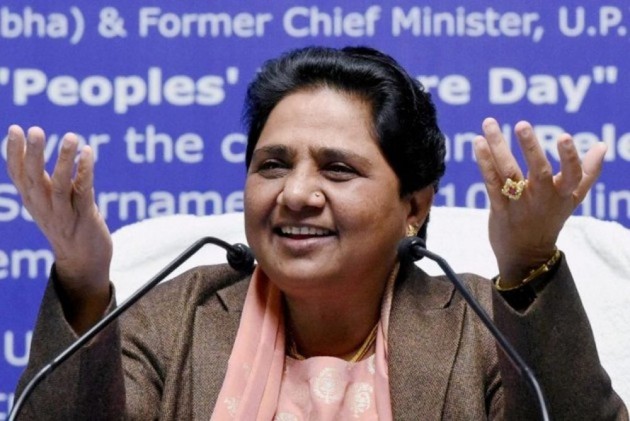 BSP supremo Mayawati on Saturday slammed PM Narendra Modi for including his caste in the list of backwards during his tenure as the Gujarat chief minister and said he had done this for electoral profits and to kill the rights of the backward castes.

Addressing a press conference in Lucknow, Mayawati said, "In order to derive political profits during elections, he (Modi) got his upper caste included in the list of backward castes. Like (SP patriarch) Mulayam Singh Yadav and (SP chief) Akhilesh Yadav, Modi was not born in backward caste."

"Today, at Kannauj, he (Modi) said Behenji and Akhilesh think of him as a lowly (neech) person as he hails from a backward caste. Their (BJP's) Dalit-backward card is not working anymore," she added.

Terming Modi's allegation as "mischievous", the former Uttar Pradesh chief minister said she never considered the prime minister a lowly person and always treated him with all due respect as a member of an upper caste.

"Then, how does the issue of calling him 'neech' arise? This makes me feel that he considers the upper-caste society as lowly," she said.

Asserting that this attitude of the saffron party was evident in the case of Dalit research scholar Rohit Vemula's death and the 2016 incident in Gujarat's Una in which the members of a Dalit family were flogged in public, she said, "Hence, in this election, the BJP and the Congress are not going to get any political mileage by playing the Dalit and backward castes card."

"And after this press conference, I think Prime Minister Modi may himself stop the politics of playing the backward card," she added.

Mayawati's comments came hours after the prime minister slammed the SP-BSP-RLD alliance in Uttar Pradesh for the ongoing Lok Sabha polls, saying the tie-up of "opportunists" wanted a helpless government at the Centre as its mantra was "jaat-paat japna, janta ka maal apna" (looting public money by playing caste cards).

At Kannauj, dubbing the opposition alliance as "mahamilavati (highly adulterated) opportunists", the prime minister said he did not believe in caste politics.

"Mayawatiji, I am the most backward...I request with folded hands not to drag me into caste politics, 130 crore people are my family.

"This country did not know my caste till my detractors abused me...I am thankful to Mayawatiji, Akhileshji, the Congress people and the 'mahamilavatis' that they are discussing my caste...I believe that taking birth in a backward caste is an opportunity to serve the country," he said.

At her press conference, Mayawati also claimed that not even one-fourth of the promises the BJP had made in the run-up to the 2014 parliamentary polls were honoured by the saffron party.