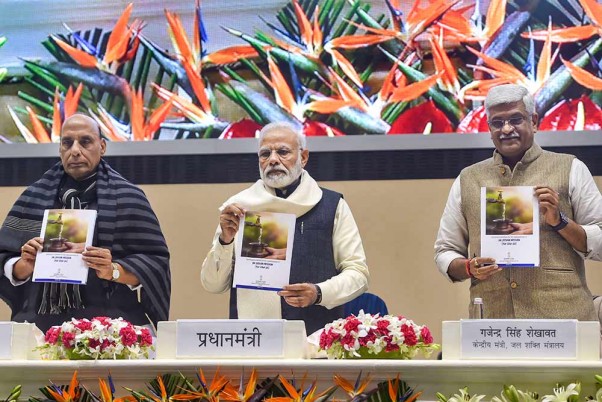 Speaking at the launch of the scheme, he said by forming the Jal Shakti Ministry, his government has tried to free the subject of water from a compartmentalised approach to a more comprehensive and holistic one.

Hit By Worst Water Crisis, Why India May Die A Thirsty Death

Rice In Deep Water! Why Green Revolution Is Facing Watery Death In Haryana

Experts differ on law to save groundwater, some blame it for pollution

He said agriculture in the country is largely based on irrigation carried out through the use of groundwater and using old-age techniques of irrigation also leads to wastage of water.

Crops like sugarcane, Modi said, need a lot of water and places where such crops are grown have noticed a depletion of groundwater table.

"To improve this, we need to make farmers aware of conservation of rain water and taking alternative crops for cultivation and move towards micro-irrigation," he said.

"It is necessary to explain the farmers in his own language," he said.

He also urged every village to prepare a water action plan, water fund and make use of the funds through different related state and central schemes.

Modi said villages with low groundwater level should prepare water budget and farmers should be encouraged to grow crops accordingly.

He said that on the one hand, Jal Jeevan Mission will work towards delivering piped water supply to every house, and on the other, Atal Jal Yojana will pay special attention to those areas where groundwater is very low.

He said in 70 years, only 3 crore out of 18 crore rural households have access to piped water supply.

"Now our government has set the target to deliver clean drinking water to 15 crore homes in the next five years through pipes," he said.

The prime minister also emphasised that water-related schemes should be made according to the situation at every village level.

This has been taken care while making the guidelines of the Jal Jeevan Mission, he added.

Modi also said that both Union and state governments will spend Rs 3.5 lakh crore on water-related schemes in the next five years.

He also urged people of every village to make a water action plan and create a water fund.

He appealed to NRIs to provide whatever assistance in water-related issues in their villages.