In their first interaction after Boris Johnson moved to No. 10, Downing Street, Modi and the UK Prime Minister discussed ways to further boost bilateral ties, as they met on the sidelines of the G7 summit here. 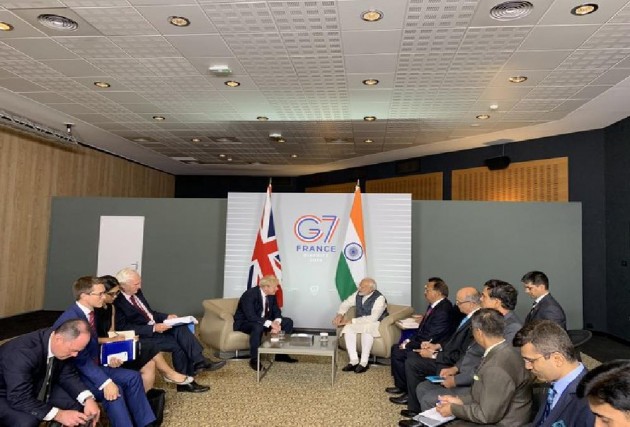 Prime Minister Narendra Modi on Sunday had a "good meeting" with his UK counterpart Boris Johnson, days after the two spoke over phone during which Modi raised the issue of vandalism of the Indian High Commission by a Pakistani mob.

In their first interaction after Boris Johnson moved to No. 10, Downing Street, Modi and the UK Prime Minister discussed ways to further boost bilateral ties, as they met on the sidelines of the G7 summit here.

Modi is participating at the G7 as a Special Biarritz Partner. "Besides participating in two Sessions on Climate, Biodiversity, Oceans & Digital Transformation, PM will hold a number of bilateral meetings with other leaders on the sidelines," Kumar posted.

On August 20, Modi, in a telephone conversation with Johnson had drawn his attention to vandalism of the Indian High Commission by a violent Pakistan-led mob on August 15. The British PM regretted the incident and assured that all necessary steps would be taken to ensure safety and security of the mission, its personnel and visitors.

Downing Street in a readout of the conversation, said Johnson told Modi that Kashmir is a bilateral issue.

The British Prime Minister "made clear that the UK views the issue of Kashmir is one for India and Pakistan to resolve bilaterally".

"He underlined the importance of resolving issues through dialogue," it said.

Modi also congratulated Johnson on his election to the office, and expressed his readiness to work with him for strengthening the strategic partnership between India and the UK.

Last Friday, the UK denied that it had backed Pakistan and China in calling for the August 16 closed-door UNSC session on Kashmir and stressed that all issues between India and Pakistan should be resolved bilaterally.

In a statement, the UK also said that it does not seek to mediate in the matter.

"There has been some inaccurate speculation about the UK position at the closed session of the UN Security Council on August 16 on Kashmir.

"The UK did not call for this session or support a formal council statement, and we have a long-standing position that this dispute should be resolved bilaterally between the countries concerned.

"Neither do we seek to mediate. We continue to call for restraint and action to address current concerns, and welcome efforts to do so as soon as possible," it said.