Prime Minister Narendra Modi in a tweet said there was a discussion ‘about ways to strengthen the friendship between India and Italy’. 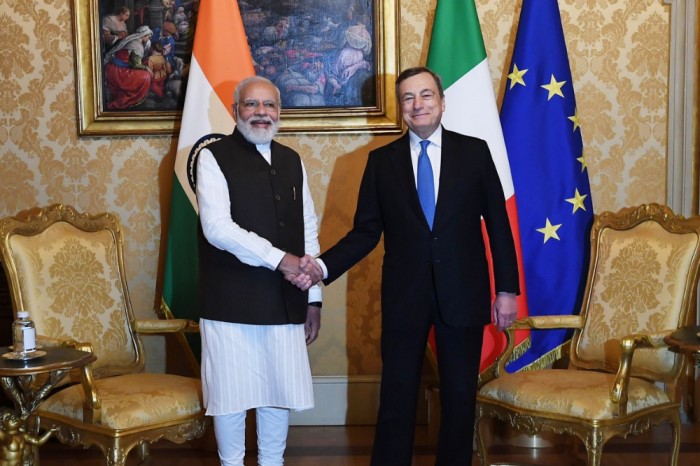 Prime Minister Narendra Modi held meeting with his Italian counterpart Mario Draghi on the side-lines of the G20 Summit.

"Glad to have met PM Mario Draghi in Rome. We talked about ways to strengthen the friendship between India and Italy. There is great potential to further scale up economic linkages, cultural cooperation and for us to work together towards a more environment friendly planet," Modi tweeted.

Glad to have met PM Mario Draghi in Rome. We talked about ways to strengthen the friendship between India and Italy. There is great potential to further scale up economic linkages, cultural cooperation and for us to work together towards a more environment friendly planet. pic.twitter.com/9sMuDPHSqp

Modi, who arrived in Italy earlier in the day at the invitation of his Italian counterpart, was received by Draghi upon his arrival at Palazzo Chigi, the seat of the Council of Ministers and the official residence of the Prime Minister of Italy, for the meeting.

Modi was also accorded a guard of honour.

Foreign Secretary Harsh Vardhan Shringla told reporters at a briefing that the two leaders discussed the challenges posed by climate change and the COP26 Climate Summit.

They also discussed the situation in Afghanistan after the Taliban seized power in Kabul as well as the developments in the Indo-Pacific region.

Shringla said the issue of mutual vaccination certification was discussed.

The issue of easier access travel with normalisation that is increasingly seen as countries recover from the Covid-19 pandemic was certainly discussed.

"There was a conversation on mutual recognition of vaccines. "I think there is a sense that this is one very, I would say, doable mechanism through which we can facilitate easier international travel," the foriegn secretary said.

"We have proposed a mutual recognition of vaccination certification even at the G20. But as we speak, discussions on an outcome document are still on. So I think most countries are quite happy with the idea of facilitating smoother international travel," he said.

But the fact of the matter is that a number of countries feel that easier access and easier travel is something that we need to collectively work on. "And that point that the Prime Minister made, I think has been received and noted," Shringla said.

During the meeting, the two prime ministers looked at other areas of cooperation between India and Italy.

India and Italy also signed an agreement statement of intent on textiles cooperation during the meeting. There was a very good discussion on two-way investments, particularly in the clean energy and renewable sector were Italy has a lot of expertise.

"I think this is something that both prime ministers agreed to see how we can take forward, the foreign secretary said.

Earlier, the spokesperson of the Ministry of External Affairs Arindam Bagchi tweeted that the two prime ministers reviewed the 2020-2025 Action Plan of India-Italy bilateral partnership, and reiterated the commitment to further expanding trade and investment linkages.

Italy is among India's top five trading partners in the EU. India ranks 19th as country of origin of Italian imports, accounting for 1.2 per cent of Italian imports. Italy ranked 18th in FDI inflows in India during April 2000 to December 2020 with FDI inflow of USD 3.02 billion during this period.

In his departure statement on Thursday, Modi said he will be visiting Rome and the Vatican City from October 29-31.

"During my visit to Italy, I will also visit the Vatican City, to call on His Holiness Pope Francis and meet Secretary of State, His Eminence Cardinal Pietro Parolin," Modi said.

From Rome, Modi will travel to Glasgow, the UK, at the invitation of British Prime Minister Boris Johnson to attend the Climate Summit. (With PTI inputs)