PM Narendra Modi, who arrived in Russia on a two-day visit during, will hold summit talks with President Vladimir Putin and attend the Eastern Economic Forum. 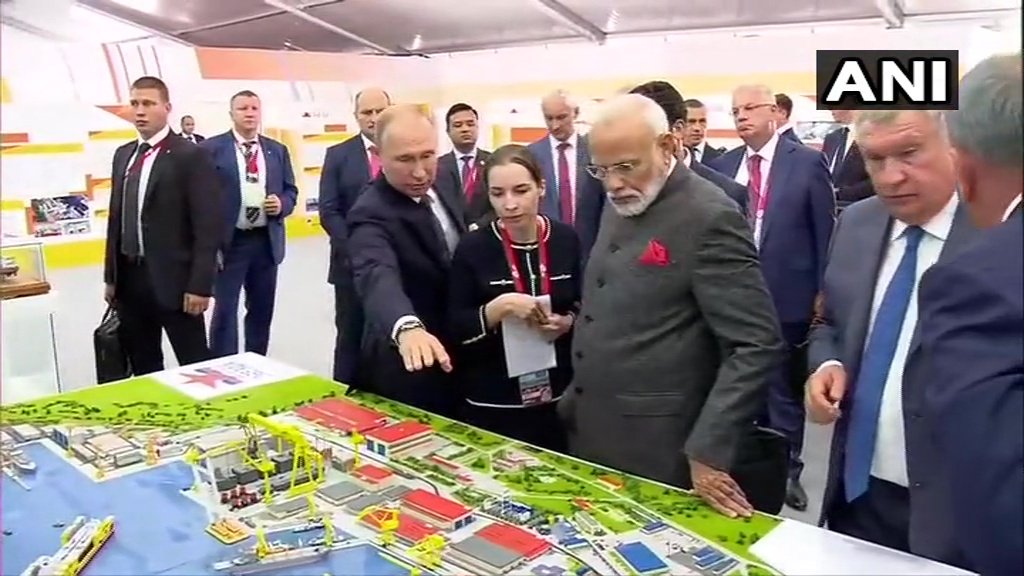 Prime Minister Narendra Modi visited Zvezda shipbuilding complex along with Russian President Vladimir Putin on Wednesday and interacted with the management and workers of the shipyard.

Modi, who arrived in Russia on a two-day visit during which he will hold summit talks with President Putin and attend the Eastern Economic Forum, is the first Indian prime minister to visit to the Russian Far East Region.

During his visit to the shipyard, Prime Minister Modi was accompanied by President Putin. The two leaders hugged and shook hands before their departure for Zvezda shipyard.

Modi interacted with the management and workers of the shipyard.

In the future, the ships built at that shipyard "will be used to deliver Russian oil and liquefied natural gas to world markets, including India," President Putin's aide Yuri Ushakov was quoted as saying by Tass news agency.

The Zvezda shipyard is being set up on the base of the Far Eastern Shipbuilding and Ship Repair Center by a consortium of Rosneft, Rosneftegaz and Gazprombank. The shipyard will produce heavy tonnage ships, offshore platform elements, ice-class vessels, special vessels, and other marine equipment, according to the Russian news agency.

After their visit to the shipyard, the two leaders will hold the 20th India-Russia Annual Summit.

Earlier, Modi was warmly welcomed at Vladivostok airport on his third bilateral visit to Russia.

Ahead of his visit to Russia, Modi said he looked forward to discussing regional and international issues of mutual interest with President Putin.

"I look forward to discussing with my friend President Putin the entire gamut of our bilateral partnership as well as regional and international issues of mutual interest," he said in his departure statement in New Delhi.

"I also look forward to meeting other global leaders attending the Eastern Economic Forum and interacting with Indian Industry and business representatives participating in it," Modi said.

The forum focuses on development of business and investment opportunities in the Russian Far East Region and presents enormous potential for developing close and mutually beneficial cooperation between India and Russia in the region.