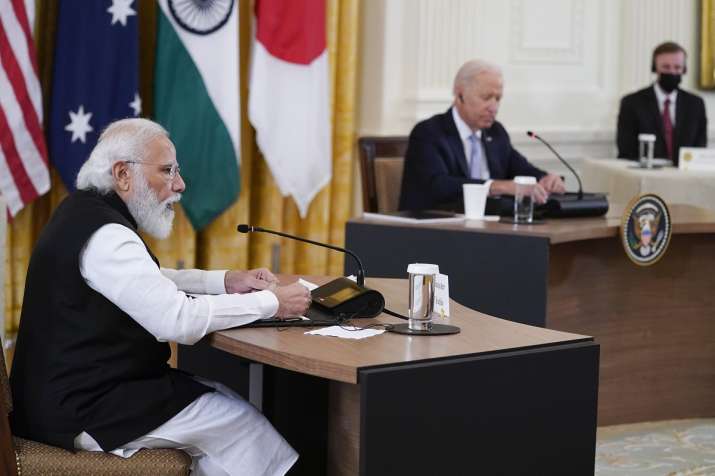 After attending Quad Summit at Washington, Prime Minister Narendra Modi on Saturday arrived in New York  to address the 76th United Nations General Assembly, which was held virtually in 2020 owing to the COVID-19 pandemic.

PM Modi flew to New York from Washington after finishing his first bilateral meeting with US President Joe Biden in the Oval Office of the White House and attending his first in-person Quad summit on Friday.

The prime minister and his counterparts - Scott Morrison of Australia and Japan’s Yoshihide Suga - attended the meeting of Quad leaders hosted by US President Biden in Washington.

"Landed in New York City. Will be addressing the UNGA at 6:30 PM (IST) on the 25th," the prime minister said in a tweet.

"Voicing the sentiments of the 1.3 billion people of India! PM @narendramodi arrives in New York to address the 76th UNGA tomorrow. India’s current membership of the @UN Security Council lends even greater significance!," the Ministry of External Affairs said in a tweet.

The prime minister was received at the airport by India’s ambassador to the US Taranjit Singh Sandhu and India’s Permanent Representative to the UN ambassador T S Tirumurti.

As per the second provisional list of speakers for the General Assembly, about 109 heads of state and government will address the General Debate in person and nearly 60 will deliver speeches through pre-recorded video statements.

It was the first time in the UN’s 75-year history that the high-level session had gone virtual. This year too, the option has been kept open for the world leaders to send in pre-recorded statements since the pandemic continues to rage across several nations around the world.

Modi will return to India after his address to the General Assembly.