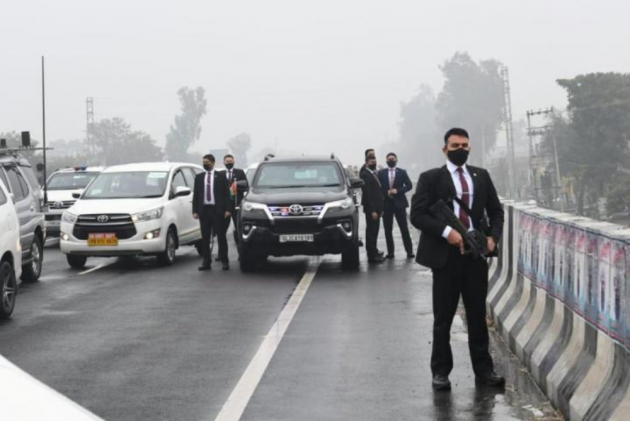 Prime Minister Narendra Modi's convoy was stuck for nearly 20 minutes on a flyover in Punjab, leading to an uproar from the ruling party regarding a lapse in the PM's security. The delay occurred after protesting farmers blocked the route of his convoy while he was on his way to pay homage to the National Martyrs Memorials at Hussainiwala border in Ferozepur district on Wednesday. Following the blockade, the PM returned from poll-bound Punjab without attending any event, including a rally scheduled at Ferozepur.

Prime Minister Narendra Modi was set to travel from Bathinda to Ferozepur by air, for which three helipads were built in Ferozepur so that the PM could land anywhere.

On Wednesday when the PM landed at Bhisiana (Bathinda) airport at 10.25 am, it was raining heavily. For over 35 minutes, Modi waited for the weather to clear before deciding to proceed to the Hussainiwala memorial at Ferozepur by helicopter. However, due to inclement weather, it was decided at 11 am that the PM's convoy will travel 122 km by road.

According to sources within the PM's office, this change of plan was promptly conveyed to the Punjab government and the state police. Around 1 pm, the PM’s cavalcade reached the flyover near Piareana village only to find a traffic jam with buses coming from the opposite side and protesting farmers on the road. They were members of the Bhartiya Kisan Union Krantikari (Phul) and were protesting against BJP workers headed for the PM’s rally at Ferozepur. 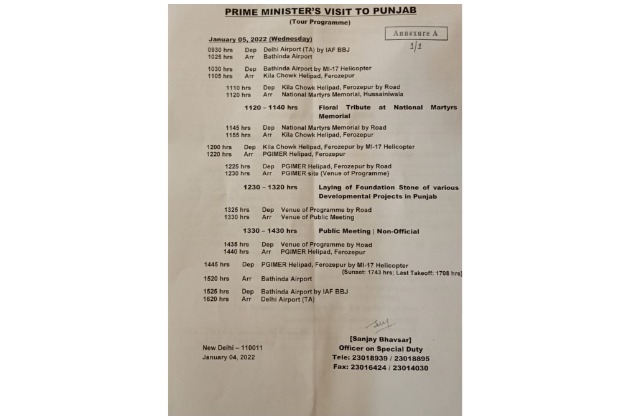 The protesters blocked Modi's route amd reportedly made announcements from speakers in the village, calling for others to join the protest. This has been acknowledged by the protesting farmers themselves in front of the camera, whose videos are going viral.

Amid outrage and debate regarding the PM's security, many have blamed the incident on a lapse of security and safety protocols by Punjab Police. Critics have claimed that Punjab Police's negligence was responsible for the breach in the PM's security. The crowd of protesting farmers, which was earlier stopping buses full of BJP workers from going to Modi's Ferozepur rally, had already come to know about the route of the Prime Minister by road.

In viral videos, policemen posted on the Prime Minister's route have been seen taking tea with the protesters instead of clearing the crowd on the route. This has raised questions on the negligence of the Punjab Police.

A demonstrator on PM Modi's route said on camera, “We had blocked the bridge, earlier we stopped the convoy of BJP workers and after this, as soon as we came to know that the Prime Minister is coming from Bathinda road to Moga highway by this route, we immediately gave voice through the speakers of the nearby villagers of village Piareana that Modi is coming from here.. After which we completely blocked the flyover by installing trolleys, forcing the PM Modi convoy to return from there”.

The protesters has set up just about eight-10 km ahead of the spot where the Prime Minister's convoy stopped on the National Highway. As soon as the protesters got wind of the PM's convoy approaching, some of them started to move toward it. Some even managed to reach close to the convoy.

Sensing the situation, the security officials of the PM decided to return, fearing an altercation with the protesters. BJP leaders also alleged that there was no jam till 10 minutes before the convoy reached. The PM's road was deliberately blocked at the behest of the government,the party alleged.

Punjab Chief Minister Charanjit Singh Channi, however, denied there was any security lapse or political motive behind it, he said, “according to the program sent to us, PM was to fly from Delhi at 9.30 in the morning. He was to reach Bathinda airport at 10.25 am. After this 5 minutes from Bathinda at 10.30, MI 17 helicopter was to reach Firozpur at 11.05 hrs. We had asked to cancel the program due to rain but we were assured that the helicopter would fly in the rain. But at the last moment, instead of a helicopter, the PM left from Bathinda for Hussainiwala(Ferozepur) by road.”

On PM's security lapse issue, a former DGP of Punjab says, "The Prime Minister's route is unhindered, but Punjab Police was not interested in ensuring it. In one of the videos that have surfaces, it is visible that instead of getting the PM's route cleared, Punjab Police officers and jawans also continued to enjoy with the protesters. It is seen in this that the policemen were not interested in opening the jam, rather they were just doing the work there in the name of duty.”

“We are looking into the matter in detail and soon will submit a report to the state government as well as the Home ministry," Verma told Outlook.

What did Punjab Police say?

Punjab's ADGP Law and Order Naresh Kumar told Outlook that police had given three warnings about the road blockade by farmers. The police were asked to prepare a diversion plan. These instructions were sent on January 1, 3 and 4, the internal memo sent on January 1 said that the CM and other VIPs can come by road due to the possibility of rain on January 5. For this, planning of route arrangements was asked to be made in advance. After this, another internal memo was sent on 3 January. In which it was said that there are sugarcane fields, canals and tube wells in Ferozepur where the deployment of police forces should be considered. It was also asked to ensure that the protesters do not block the route of the rally, and create alternate routes in advance. Police were asked to deploy in the form of groups and mobile teams on the route so that they could clear the jam if needed.

In the internal memo of January 4, 24 hours before the PM's visit, the ADGP had directed officers to keep a close watch on the movement of farmers.  It was also said that there could be roadblocks due to the dharna. Therefore, police were asked to prepare the necessary traffic diversion plan in advance. It appears, however, that some officers did not follow the warnings