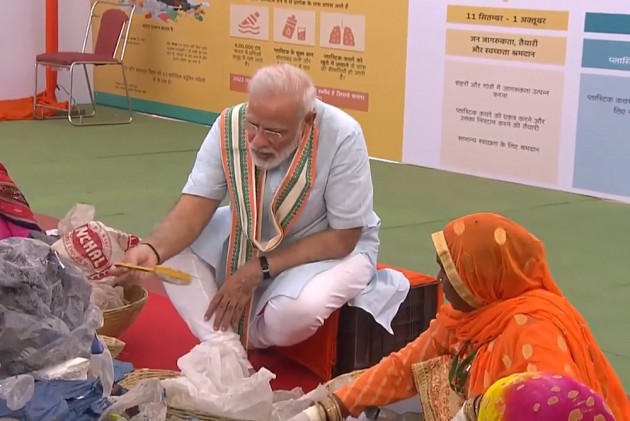 Advocating a complete ban on the single-use plastic, Prime Minister Narendra Modi on Wednesday sat with a group of women rag pickers and segregated plastic from garbage in Mathura, Uttar Pradesh.

Some 25 garbage workers met the Prime Minister as part of the "Swachhta Hi Seva" programme.

Prime Minister Modi was in Mathura to inaugurate National Animal Disease Control Programme. He said that there is a need to eliminate single-use plastic in the country as animals are dying because of plastic trash.

"The problem of plastic is growing each day. You are well aware of how plastic is becoming a major factor of animals' death," he said.

During his address to the nation on the Independence Day, Modi had pitched for shunning the single-use plastic.

"Can we free India from single-use plastic? The time for implementing such an idea has come. Let a significant step be made on October 2," he had said.

Prime Minister gesture to help rag pickers segregate plastic from the garbage is seen as part of the campaign to end the single-use plastic.