The stamp of approval by the PM is significant since Yogi has been under fire for mismanagement of second Covid-19 wave. 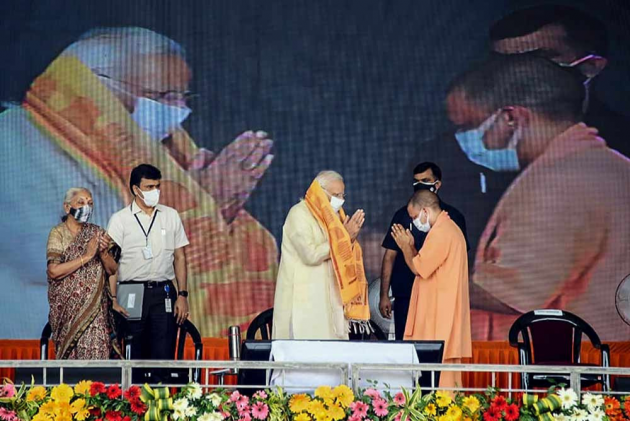 For the BJP, the battle for Uttar Pradesh has officially begun with Prime Minister Narendra Modi visiting his constituency Varanasi today and inaugurating and laying the foundation stone of projects worth Rs 1600 crore.

Only the shankh-naad (blowing of the conch to herald a war) was missing as the Prime Minister visited Varanasi with six months to go for Assembly elections. With Uttar Pradesh chief minister Yogi Adityanath on his side, the PM praised the efforts of the state government at handling the Covid-19 crisis. Describing Yogi’s handling of the coronavirus as “commendable”, he said that “the way the state controlled the second Covid-19 wave and stopped its spread is unprecedented.”

The stamp of approval by the PM is significant since Yogi has been under fire by the opposition for mismanagement of second Covid-19 wave. He also lauded UP for the highest number of Covid-19 tests and vaccinations, as he inaugurated the 100-bed mother and child hospital at the Banaras Hindu University (BHU). This is among the slew of other projects, aimed at promoting tourism and infrastructure development, that he inaugurated. The highlight among the new projects is ‘Rudraksha’ – the International Cooperation and Convention Centre, constructed with Japanese assistance.

Rudraksha is the holy seed that is used as a prayer bead, generally associated with Lord Shiva. With the ceiling shaped like a Shivling, the convention centre is supposed to be a tribute to the spiritual, religious, and cultural heritage of the city, in addition to the friendly ties with Japan.

Incidentally, PM Modi referred to Varanasi only by its ancient name of Kashi, underlining ideological importance of the city from an electoral perspective. Historically, the city has also been known as an industrial and cultural centre, fed by the holy river Ganga. One of the most important cities of the Poorvanchal region, it is crucial for BJP’s UP campaign. If the Battle for India in 2024 hinges on UP, then the battle for the state depends on this region.

Poorvanchal, the eastern part of UP, accounts for 29 of 80 Lok Sabha seats, and 170 of the total 403 Assembly seats. Known to be highly volatile and communally polarised, it is one of the most densely populated regions in the country. Though lying in the fertile Indo-Gangetic plains, the region has long been under-developed, much like the neighbouring districts of Bihar. In addition to the PM’s constituency of Varanasi, cities like Ayodhya - home to the upcoming Ram Mandir - and Gorakhpur, the traditional bastion of CM Adityanath, are a part of the region. Its importance cannot be underscored for the saffron party.

Among the projects worth Rs 744 crore that the PM inaugurated are multi-level parking at Godauliya, Ro-Ro Vessels for tourism development on River Ganga and three-lane flyover bridge on the Varanasi Ghazipur Highway. He also laid the foundation stones of several projects and public works worth around Rs 839 crores. These include the Centre for Skill and Technical Support of Central Institute of Petrochemical Engineering and Technology (CIPET), 143 rural projects under Jal Jeevan Mission and a mango and vegetable integrated packhouse in Karkhiyaon.