PM Narendra Modi would also be possibly the first Prime Minister to visit the municipal town, about 400 kilometres north of Kolkata, and part of the Balurghat Lok Sabha constituency. 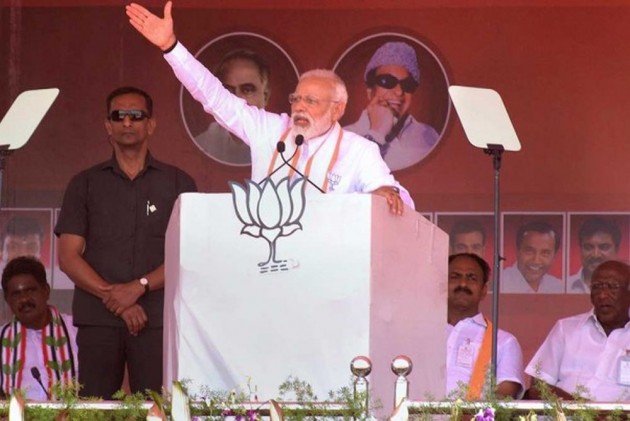 Prime Minister Narendra Modi will address a public rally in Buniaydpur of northern West Bengal's South Dinajpur district on Saturday, in a bid to give a further fillip to the BJP's Lok Sabha polls prospects in the state.

For Modi, who is seemingly laying stress on electioneering in eastern India, it would be his fifth visit to the state this year, and the seventh public meeting in Bengal in around two and a half months.

Modi would also be possibly the first Prime Minister to visit the municipal town, about 400 kilometres north of Kolkata, and part of the Balurghat Lok Sabha constituency.

The public meeting at Narayanpur ground has been organised in support of BJP candidate Sukanta Majumdar, a reputed botanist of Gour Banga University who is taking on sitting Trinamool Congress MP and noted theatre activist Arpita Ghosh.

The BJP is dreaming big in Balurghat, once a stronghold of the Left. The saffron party is hoping to wean a substantial part of the Left vote bank which has seen a lot of erosion across the state, as also get a large chunk of the substantial tribal vote in the constituency.

The Prime Minister in his speech is expected to touch on the Citizenship Bill, as also tribal issues, and the welfare projects initiated by his government.

"This ground can hold a capacity crowd of two lakh. But the sort of response we are getting, I think this ground will turn out to be too small for the rally," BJP General Secretary Kailash Vijayvargiya said after supervising the arrangements.

Vijayvargiya said his party was taking every precaution to make the arrangements foolproof, as the support staff like the sound technicians, decorators etc have no experience of working in a meeting to be addressed by the Prime Minister.

Stringent security has been put in place for the meeting, with the Special Protection Group already taking over the venue.