PM Modi To Discuss China At All-party Meet Today; AAP, AIMIM And RJD Aghast For Being Left Out

The all-party meet called by PM Modi at 5 p.m. will be attended by the political parties through video conferencing. However, there will be no Aam Aadmi Party, Rashtriya Janata Dal and the AIMIM representatives. 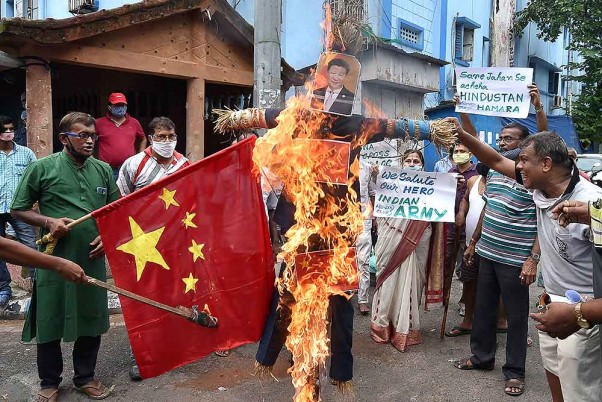 Locals burn an effigy of Chinese President Xi Jinping during a protest against the killing of 20 Indian Army soldiers in Ladakh's Galwan Valley by the Chinese People's Liberation Army (PLA) troops, in Kolkata.
PTI Photo
IANS June 19, 2020 00:00 IST PM Modi To Discuss China At All-party Meet Today; AAP, AIMIM And RJD Aghast For Being Left Out

There will, however, be no Aam Aadmi Party, Rashtriya Janata Dal and the AIMIM.

The meeting is scheduled at 5 p.m. and it will be attended by the political parties through video conferencing.

This is the first all-party meeting called by Modi after the death of 20 Indian soldiers in a violent face-off with Chinese troops at patrol point 14 on Monday night in Ladakh's Galwan valley.

The India-China faceoff at the Line of Actual Control (LAC) has been going on since early May and the brutal attack came amid a de escalation operation and disengagement talks already underway.

However, RJD, AAP and the AIMIM alleged that they have not been invited to the meeting called by the Prime Minister.

In a tweet on Thursday night, AAP Rajya Sabha MP Sanjay Singh said, "A strange egoistic government is at the Centre. AAp has its government in Delhi, in Punjab it is the main opposition party and also has four MPs and also has its presence across the country. But for all the important issues BJP will not take the opinion of AAP. What the Prime Minister will say during the all party meeting is eagerly awaited by the country Amen."

Coming under attack from the opposition parties, especially the Congress, the Prime Minister after lengthy meetings with Defence Minister Rajnath Singh and External Affairs Minister S. Jaishanker, on Wednesday sent out a clear signal to China that India won't tolerate any misadventures when it comes to defending its sovereignty and territorial integrity.

Articulating India's clear stand, the Prime Minister at the beginning of his video conferencing meeting with the chief ministers said: "I would like to assure the nation that the sacrifice of our jawans will not go in vain. For us, the unity and sovereignty of the country are important. India wants peace but when instigated, India is capable of giving a befitting reply," he said, adding sacrifice and valour are in India's character.