The prime minister described his talks with Scott Morrison as 'an outstanding discussion', covering the entire expanse of ties between the two strategic partners. 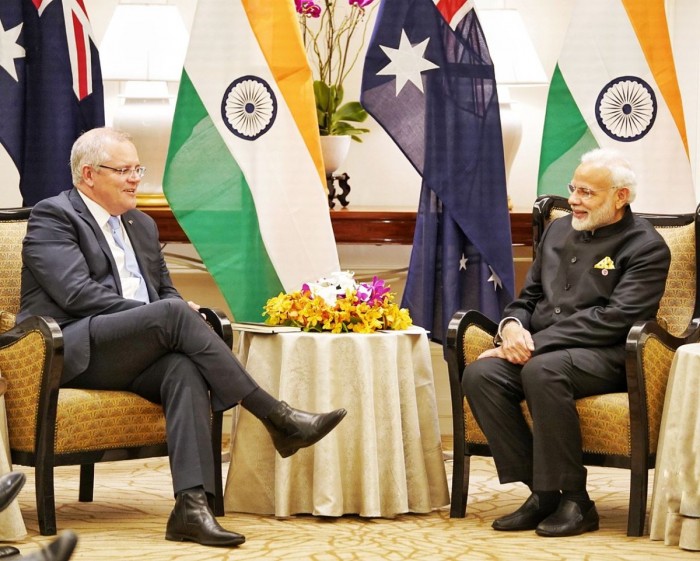 A process of comprehensive reforms covering almost all areas has been initiated in India as it is viewing the coronavirus crisis as an "opportunity", Prime Minister Narendra Modi said on Thursday at an online summit with his Australian counterpart Scott Morrison.

In his opening remarks, Modi also pitched for a coordinated and collaborative approach to come out of the adverse economic and social impact of the epidemic that has infected around 65 lakh people and killed 3.88 lakh globally.

The prime minister described his talks with Morrison as "an outstanding discussion", covering the entire expanse of ties between the two strategic partners.

"Our government has decided to view this crisis as an opportunity. In India, a process of comprehensive reforms has been initiated in almost all areas. It will soon see results at the ground level," the prime minister said.

Modi also conveyed his appreciation to Morrison for taking care of the Indian community in Australia, especially the students, during the "difficult time".

The overall focus of the talks was on further broadbasing bilateral ties in a range of areas like healthcare, trade and defence.

In his remarks, Morrison complemented Modi for his "constructive and very positive" role including at the G-20 role in pushing for a concerted global approach in dealing with the coronavirus crisis.

Modi said he believed that it is the "perfect time and perfect opportunity" to further strengthen the relationship between India and Australia.

"We have immense possibilities to make our friendship stronger," Modi said, adding: "How our relations become a 'factor of stability' for our region and for the world, how we work together for global good, all these aspects need to be considered."

The prime minister said India was committed to expand its relations with Australia on a wider and faster pace, noting that it is important not only for the two countries, but also for the Indo-Pacific region and the world.

"The role of our comprehensive strategic partnership will be more important in this period of global epidemic. The world needs a coordinated and collaborative approach to get out of the economic and social side effects of this epidemic," he said.

Relationship between the two nations was upgraded to a 'Strategic Partnership' level in 2009. Since then, both countries have expanded their cooperation in a range of key areas.

In its White Paper on Foreign Policy in 2017, Australia recognised India as the "pre-eminent maritime power among Indian Ocean countries" and a "front-rank partner of Australia".

The bilateral economic engagement too has been on an upswing in the last few years. According to official data, the trade between the two countries was around USD 21 billion in 2018-19.

In the last few years, both the countries have been focusing on expanding maritime cooperation.

India and Australia commenced their first bilateral naval exercise 'AUSINDEX' in 2015 which was focussed at deepening defence and maritime cooperation especially in the Indian Ocean.

Australia has been supportive of India's position on cross-border terrorism and on asking Pakistan to take meaningful action against terrorist groups operating from its soil.